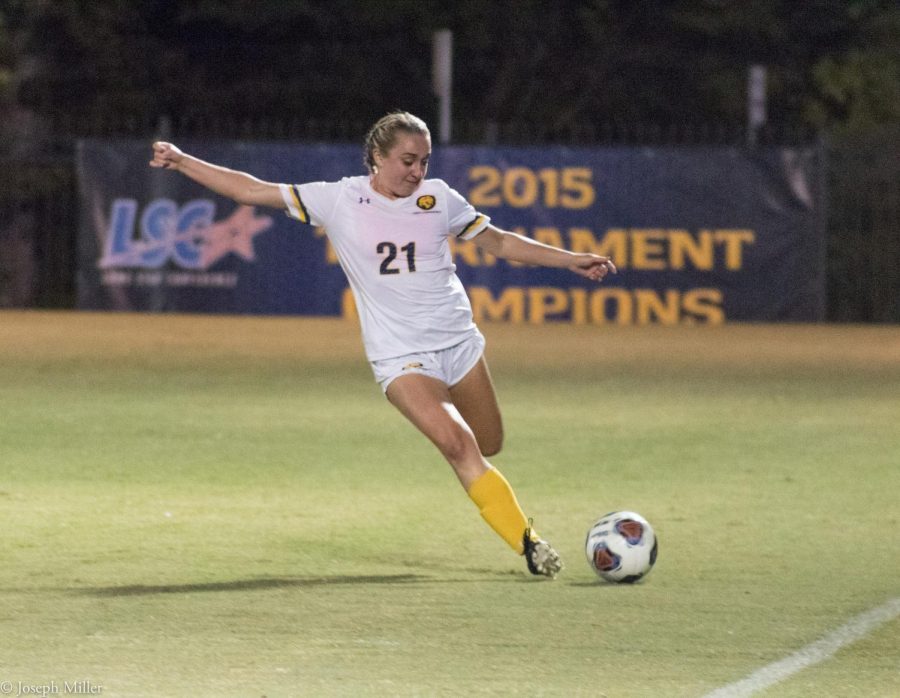 Kara Blasingame takes a shot at the goal

The Texas A&M University-Commerce soccer team struggled this past weekend, as they came up short in both games against Texas Woman’s University this past Thursday and Dallas Baptist University on Saturday.

One thing that I have said in the past, is that the Lions needed to work on consistency as they battle in the LSC. This past weekend the Lions showed heart, but they allowed themselves to get into a whole that they couldn’t get themselves out of.  In both games they allowed their opponents to score early while the Lions couldn’t seem to respond till later in the match.

However, they don’t need to hold their heads down because that won’t do them any good with the games they have coming up. Both of the teams that the Lions will face are ranked higher than them and with a combined record they only have two losses.

The Lions squared off against TWU and started the game shaky, by letting TWU take the lead early in the match with a goal in the 21st minute.

The Lions responded in the 31st minute from a goal from Leslie Campuzano. The Lions were awarded a free kick, just outside of the penalty box that Campuzano could capitalize on to tie the game at 1-1.

From this point on in the game neither side could find any opportunities, so the half ended at 1-1.

Starting the second half TWU scored early, taking a 2-1 lead that would close the game. Since the goal, the Lions could not get an advantage on TWU.

As the game was closing the Lions had three opportunities that they could not capitalize on. Two of them were missed kicks and the other was a penalty kick that was committed by a hand ball within the box by TWU.

Against DBU the Lions didn’t show the same struggles, the Lions had a great start but could not find the back of the net.

The Lions competed with DBU and didn’t let up until the 25th minute of the game. DBU made a substitute that would go on to score in her first 35 seconds of playing time. The half ended with DBU leading 1-0.

Starting the second half the atmosphere changed and the Lions gave up another goal in the 53 rd minute from a corner kick. Even though the Lions were now down 2-0, they didn’t show signs of defeat.

They continued to fight and earned a corner kick in the 62nd minute. Kara Blasingame whipped the ball into the box and it found its way across the line for the Lions’ goal, making it 2-1.

With the Lions missing their last few chances, the game ended with A 2-1 DBU victory.

The Lions will face off next against Angelo State, for an away game on Thursday, Oct. 24 at 7 p.m.