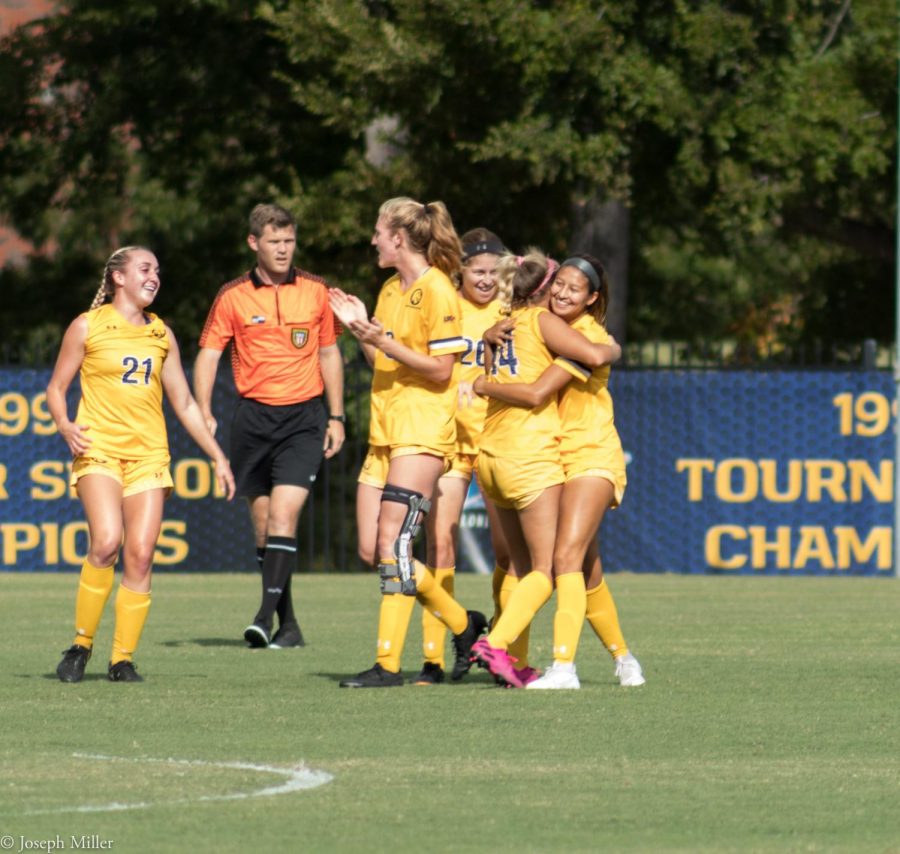 The Lions celebrate with Leslie Campuzano after her goal

Starting the second half the patriots were on the pursuit to break the tie, but the Lions beat them to the punch. Jen Peters made three early saves that led to Leslie Campuzano assisting Naomi Sink to score a goal in the 52nd minute, giving the Lions a 2-1 lead.

In the closing minutes of the match, the Lions really had to buckle down on defense. The Patriots came close to forcing the match into overtime, but they could not capitalize on their opportunities.

The Lions went on to secure the 2-1 victory through the stronghold of the defense. A&M-Commerce finished with a total of 15 shots, eight shots on goal and five saves.

According to Lions Athletics, Head Coach Neil Piper had some comments after the game.”I thought in the first half, we were the better team. They had some chances but I felt like we could have been three or four goals up, but we weren’t. To Tyler’s credit, they hung in there and created some good chances themselves. In the second half, we got that early goal and then kind of just hung on. I think the last 20 minutes, we got tired and they took it to us. We were able to hold on and get the win.”

The victory against UT Tyler improves the Lions record to 6-3-1 and their conference record improves to 3-2.

This was a game that the Lions needed to win to help boost their confidence and record in the Lone Star Conference. Both sides were fighting for possession of the ball at the start of the game.

Neither side could really take an advantage in the game until the 10th minute. Campuzano scored off an assist from Amber Crews, making the score 1-0.

The Patriots had a quick response, tying the game in the 11th minute. With the switch of momentum, the Patriots attempted to score again, but Peters kept the score tied at one-all going into the half.

Looking ahead, the Lions will have a tough week against Texas Woman’s and Dallas Baptist University. Piper had additional comments about the preparation of those LSC matchups, “We will give our players the weekend off and then get ready for TWU and Dallas Baptist next week. Those are two tough matches. I’m glad we have them at home.”

The Lions return to action on Thursday with a home match against Texas Woman’s at 7 p.m. on the Lion Soccer Field.