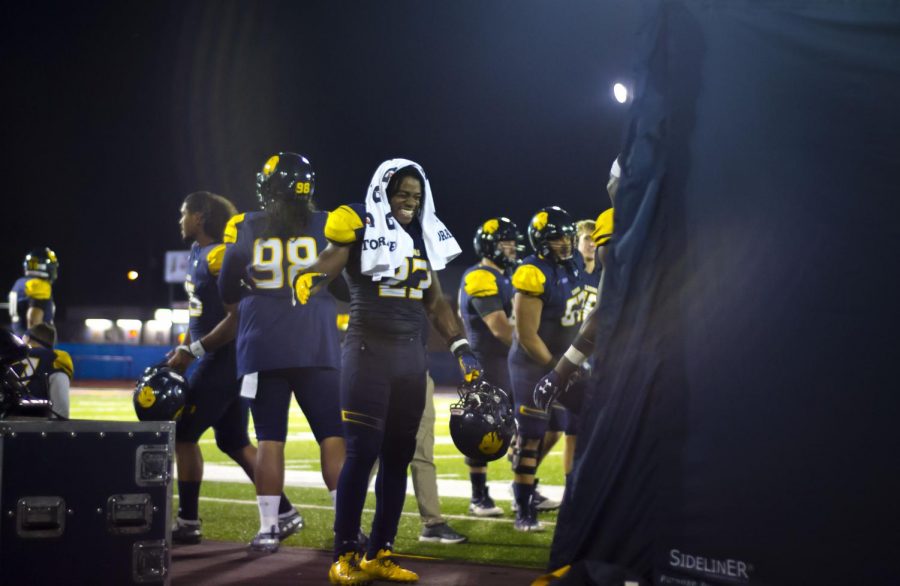 With the win the Lions improve to 4-1 on the season and 2-0 in Lone Star Conference play. The Lions, alongside Tarleton State remain as the only two undefeated teams left in the LSC.

A&M-Commerce started the game off hot, marching down the field on their opening drive, but the drive was halted as a fumble was forced by the Javelinas. A&M-Kingsville countered the Lions and drove down the field into the red zone, but running back Kris Barnes was stripped by Jaylon Hodge and Kader Kohou recovered the ball to give it back to the Lions.

The Lions got on the board first as Antonio Lealiiee broke free and ran for 51 yards, just short of the endzone. Quarterback Miklo Smalls proceeded to find Justin Herbert for his first touchdown of his collegiate career from three-yards out to give A&M-Commerce a 7-0 lead going into the second quarter.

The Javelinas attempted some trickery on their next possession, but a fake punt was sniffed out by the Lions, when Ryan Stokes broke into the backfield to make the tackle, giving the Lions great field position. The Lion offense could not convert the turnover into six, but Jake Viquez did knock down a 24-yard field goal.

The Javelinas did manage to get on the board before the half after a 34-yard rush set up a Ben Holmes six-yard touchdown pass, however Darius Williams blocked the extra point and Alex Shillow returned it back, giving the Lions two points. The Lions went into halftime leading 12-6.

The Lions broke open the game in the third quarter, scoring three touchdowns from Lealiiee, Darian Owens, and Stokes. Lealiiee broke open a 56-yard touchdown, Owens scored on a 62-yard reception from Smalls, and Stokes scored on a 34-yard pass to give the Lions a commanding 33-6 lead after three quarters.

The Lion defense shined in the third and fourth quarters, shutting out the Javelinas as the Lion offense bleed out the clock to take home the Chennault Cup for the eighth straight season.

After the game, Head Coach David Bailiff told Lion Athletics “I thought our special teams was outstanding, offense and defense had some big plays.” Bailiff also said “Hopefully we get some of our injured guys back this week. I also liked how we cut the penalties in half.”

Penalties this year have been the Achilles heel for A&M-Commerce, but the Lions did a much better job this week as they only had 8 penalties for 64 yards, improving from the 97-yards worth of penalties the week before versus CSU-Pueblo.

Kickoff will be at 6 p.m. this Saturday at Memorial Stadium as part of Hall of Fame and Letterwinners’ weekend. The game will be on national television and can be viewed on ESPN3 as part of the NCAA Division II Football Showcase series.