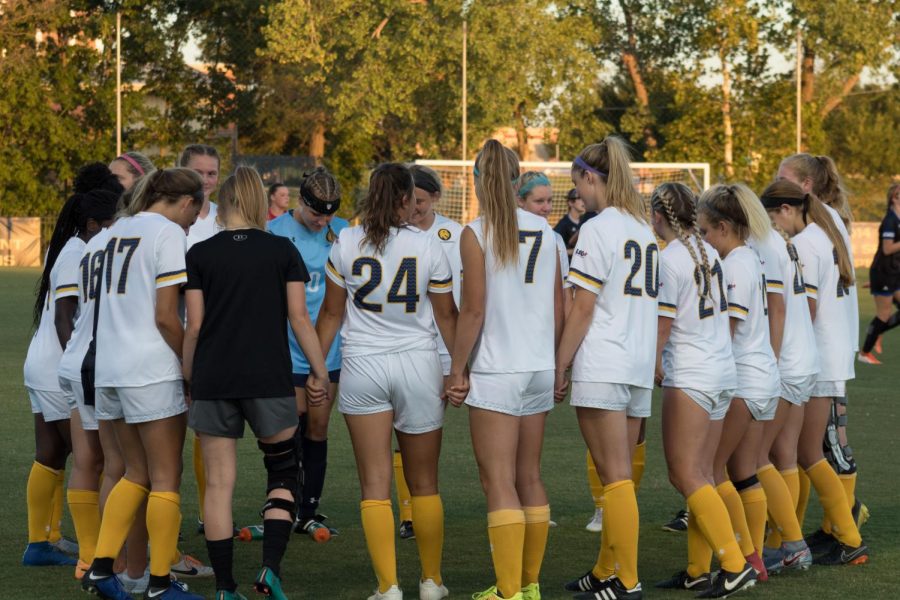 The Lions huddle up before taking the pitch

Entering conference matchups the Lions started off shaky with a 1-1 record and after this weekend their overall recorded is now 5-3-1, and their conference record is 2-2.

A LSC record of 2-2 is not bad, but the Lions will have to do better as they face harder competition in the LSC. The Lions must fix consistency issues within the team because they have shown glimpses of dominance and then the next game they seem to come out flat.

These LSC games mean too much for the Lions to be splitting them. With that being said, it’s still early and there is still a long season ahead. The Lions have time to fix the kinks before they have to worry about the LSC tournament.

The Lions are 13-19-2 against the Buffs and in this game, both sides came to play.  The game came down to the final minutes as the Lions gave up a goal in the 88th minute after being tied for most of the game.

It was really a devastating loss as the Lions fought their way back into the game only to leave with another defeat.  Naomi Sink gave the Lions their only goal in the 73rd minute.

On Oct. 5 the Lions had another  challenging away game against Eastern New Mexico, but this time the Lions got away with a 1-0 victory in overtime.

The entire match was intense, neither side could capitalize on the offensive side of the ball and both sides were stellar on the defensive side.

The game had to extend past regulation and that is where the Lions could finally get past the Greyhounds goalkeeper. The Lions held off the Greyhounds to one shot of the overtime period and found their opportunity in the 95th minute.

Lessie Campuzano found Kara Blasingame and she was able to beat three defenders before sliding the ball into the goal, giving the Lions the overtime win.

According to Lions Athletics, Head Coach Neil Piper had this to say after the game, “It was a much needed win. Both teams had some good chances during regulation.”

The Lions next game will be a back at home for a matchup against UT Tyler on Thursday, Oct. 10 at 7 p.m at the Lion Soccer Field.