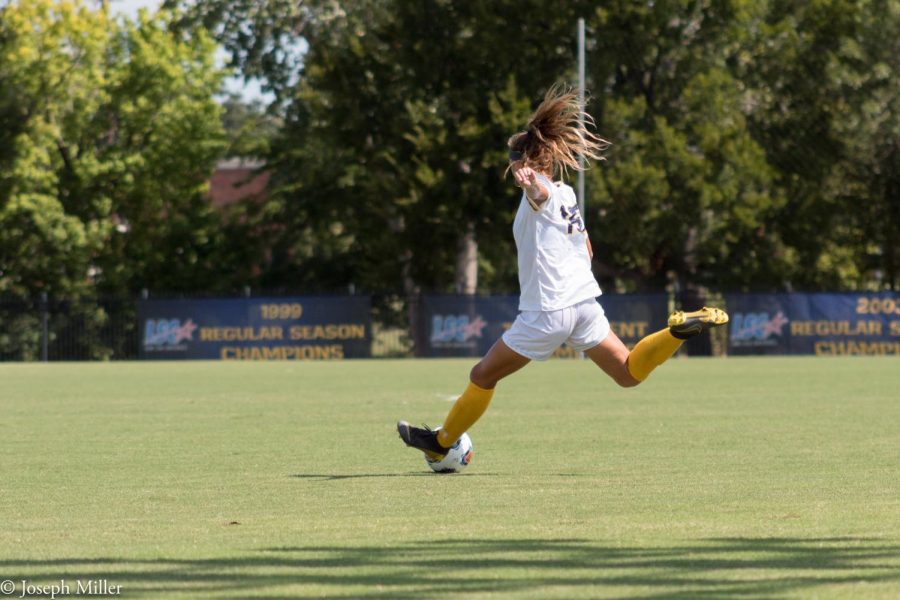 Hallie McCarroll advances the ball out of Lions territory.

The Texas A&M University-Commerce soccer team split their games this past weekend as the Lions lost to Lubbock Christian University 3-1 on Tuesday night and then defeated UT Permian Basin 6-1 on Saturday, Sept. 28.

On Thursday’s matchup the Lions did not do a good job of protecting home field against Lubbock Christian. LCU was able to capitalize quick, scoring in the 13th minute mark of the game and then in the 22nd minute.

At the half the Lions were down 0-2 and found themselves in a whole that they could not get themselves out of.

Starting the second half the Lions did not hold their heads down, they continued to fight for hope. In the 58th minute of the game the Lady Chaps added another goal making it 3-0.

With the game coming to an end the Lions manage to score a goal in the closing seconds. Amber crews saved the Lions from being shut out after she scored off of a corner kick from Leslie Campuzano.

After the tough Loss on Thursday the Lions prevailed on Saturday. They made sure to have a bounce back win and made a statement to the conference while doing it.

The Lions offense led by Campuzano and Crews started off aggressive. Crews headed in a ball off of a corner kick assist from Campuzano in the first three minutes of the game, making the score 1-0.

Then Crews was able to capitalize again in the 23rd minute after a shot from Kara Blasingame was blocked, giving the Lions a 2-0 lead going into the half. The Lions had six shots on goal finishing the half.

Starting the second half the Lions picked up where they left off, keeping the momentum of their side. In the 50th minute of the game, Blasingame scored on a penalty kick from being fouled in the box, making the score 3-0.

Five minutes later Campuzano was able to score off a pass from Blasingame, making the score 4-0.

UTPB did prevent the shutout with a goal in the 72nd minute of the game, but Campuzano was again able to get around the keeper after a header pass from Namio Sink off of a goal kick that landed at her feet.

That goal made the score 5-1, but the Lions were not finished. With a late penalty kick goal from Cora Welch, the Lions went home with a 6-1 win.

According to Lions Athletics, Head Coach Neil Piper said, “It was just a good win. We are still kind of hurting from Thursday’s game. Hopefully this gets us back on track. We have a couple of tough games coming up against West Texas and Eastern. We have to get ready for them this week.”

The Lions new overall record is now 4-2-1 and their LSC record is 1-1. The Lions have another LSC matchup against West Texas A&M University on Thursday, Oct. 3 at 7 p.m. and will be traveling to Canyon, Tx.