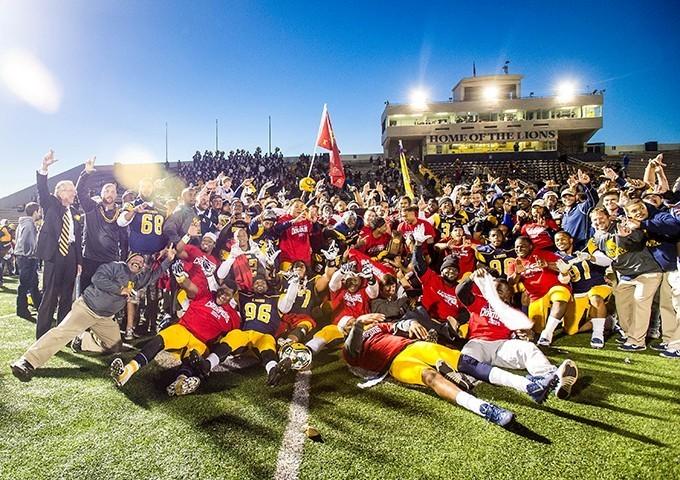 Emotions were high on Saturday in Commerce because it was homecoming and  the Texas A&M University–Commerce Lions football team was just one win away from the Lone Star Conference title.

The Lions did not disappoint the more than 9,000 in attendance with a 91-13 rout of McMurry University.

The senior members of the Lions were honored before the game, which featured A&M – Commerce racking up 582 yards of total offense and claim sole possession of the Lone Star Conference Championship.

Things did not seem to start well for the Lions, as quarterback Tyrik Rollison’s first pass was overthrown and intercepted by McMurry defender Decorian Johnson. The War Hawks were quickly stifled by the Lions defense, however, which set the tone for much of the night. All told, the Lions ended with seven rushing touchdowns, five passing touchdowns, and an interception returned for a touchdown. The Lions did not punt during the game.

Defensively, the Lions were able to come up with three turnovers, and hold the War Hawks to just 18 yards rushing. The team as a whole was able to shake what was considered a “monkey on their back” by only committing two penalties the entire game. The defense was led by a monster performance by freshman Tre’von Taylor, who ended the game with 12 tackles, 4.5 sacks which sets a new school record, 5.5 tackles for a loss which ties a school record, as well as an interception which he returned 21 yards for a touchdown.

Rollison ended the game going 7-10 with three passing touchdowns and two interceptions. Joe Bergeron lead the team with 88 rushing yards with one score, and running backs Theo Wofford and Ovie Urevbu combined for 128 rushing yards and four rushing touchdowns in the second half.

Quarterback Deric Davis found most of his playing time in the second half, and fnished with four touchdowns (two rushing and two passing), and completed all four passes he threw for 116 yards.

As well as the title, two players were honored by the conference for the week. Taylor was named the Defensive Player of the Week, and kicker Saul Martinez was named the Special Teams Player of the Week, setting a Lone Star Conference record with 13 point after attempts made. Martinez is also listed fifth in the nation with 12.3 points per game, as well as leading all kickers in scoring with 111 points.

McMurry struggled to find balance on offense after losing their starting quarterback last week to a leg injury. Four different players threw at least one pass during the game, and combined for 300 passing yards and two scores. Perhaps the only bright spot for the War Hawks were the numbers put up by wide receiver Jeret Smith, who gained 195 receiving yards on just six catches, which included an 82-yard and a 59-yard scored during the game.

With the win, the Lions will host the Tarleton State Texans in the first game of the Lone Star Conference Playoffs. The Texans are entering this game with a 4-4 record overall (4-3 in conference play). A&M – Commerce won their meeting with the Texans in October 53-25 victory. Davis started at quarterback that game due to a Rollison injury, and had a career day, throwing for 324 yards and two touchdowns.

Tarleton recovered after their loss against the Lions, winning their next three games by a combined score of 203-63, with the biggest of those being an 80-14 win over Texas A&M University – Kingsville on Oct. 11. Their winning streak was broken, however, last week when a late touchdown sealed a 34-31 defeat at the hands of the Angelo State Rams.

Tarleton currently sits as the fifth seed in the Lone Star Conference Playoffs, but due to West Texas A&M being docked five conference games from their win percentage due to a rules violation, the Texans have been thrust into the fourth seed to face the first seeded Lions.

The Texans are led offensively by quarterback Collin Strahan, who leads the team in both rushing and passing yards, scoring 25 total touchdowns (10 rushing and 15 passing). Leading receivers for the Texans are Le’nard Meyers and Clifton Rhodes III, who between them have 992 receiving yards and 13 touchdowns. Strahan had to leave the last game against the Rams on just the second offensive play of the game where he was replaced by Zed Woerner. Strahan’s status is unlisted at this time.

The Texas A&M University – Commerce Lions will host the Tarleton State Texans in the first game of the Lone Star Conference Playoffs on Saturday, Nov. 8, at 4 p.m. at Memorial Stadium in Commerce.