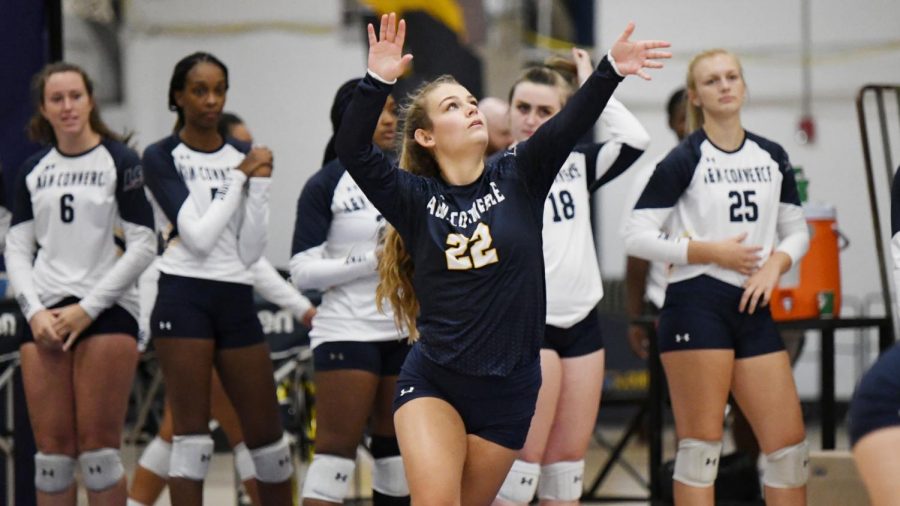 The Texas A&M University-Commerce Lions volleyball team had a weekend full of ups and downs, splitting their games both days, at the Colorado Premier Challenge hosted by Metropolitan State University of Denver and Regis University.

This tournament showed how great, but inconsistent the Lions can be. The first game of the weekend for TAMUC was against the No. 1 ranked University of Tampa Spartans. Tampa won the first two sets and was on the verge of a sweep, but TAMUC wouldn’t budge as they came back from down 2-0 to win in five sets.

“I thought we competed really hard and had really good focus,” Head Coach Craig Case said on the team’s overall play. “Tampa is a very good team and are incredible on the defensive side of the ball. And they are very efficient offensively. When you can defeat a team that plays that way, you know you are a good team. We have to continue to find ways to play that way.”

A win like this against a quality opponent such as Tampa does not come without spectacular play from all of the Commerce players. One such player that had a standout game was Shelley Chapron who led the team with 19 kills and 5 blocks. Other standout performances came from Sydney Anderson (18 kills, four blocks), Natalie Sarbeck led the team with 33 assists, and Riley Davis had a team high 14 digs and added four kills.

After knocking off No. 1 Tampa, TAMUC played one of the hosts of the tournament, Regis University. The Lions displayed their inconsistency by being swept 3-0 in the game. Perhaps winning such a difficult game against Tampa, had TAMUC unprepared for their next opponent.

“We just came off of a really emotionally draining match,” Case said on the team’s play in game two. “That was a really emotional match for our team, and then Regis is really good and they are at home. You combine an emotional, exhausting rollercoaster, then you play a team as good as Regis, you have your work cut out for you.”

Shelley Chapron and Bina Njikam each led the team with six kills, Riley Davidson led with 13 digs, and Natalie Sarbeck had nine assists.

Splitting their two games on the first day in pool play placed TAMUC in the silver bracket for Saturday’s tournament play. TAMUC stayed on course splitting the second day’s games as well.

Their first game of Saturday against West Florida was a dominant performance, winning  3-1. TAMUC had many players who had strong performances. Sydney Anderson led the team with 11 kills, Shelley Chapron had nine kills, six blocks and three aces, and Natalie Sarbeck and Shelbi Sheppard each had 21 and 20 assists respectively.

“The biggest difference is we got them out of system when we were serving and when we were attacking,” Case said on how they got the win. “West Florida is a good attacking team and a good blocking team. But when we got them out of system, that really got us going. We were aggressive but we weren’t reckless. If we can continue to find a way to play like that going forward, that will be a good thing for us.”

After such a great game, the TAMUC Lions could not follow up on it, losing to No. 12 Central Missouri in five hard fought sets. Shelley Chapron and Sydney Anderson each had 13 kills, Daniela Santos had six aces and Natalie Sarbeck led with 29 assists and three aces.

After coming off of a 2-2 weekend, the A&M-Commerce volleyball team is the No. 21 ranked team in the nation, according to the American Volleyball Coaches Association coaches poll as announced Monday. The Lions have been nationally ranked in 15 consecutive polls dating back to last season.

After the Colorado Premier Challenge, TAMUC is 5-3 on the season and open up conference play at home Sept. 20 against Texas A&M University-Kingsville.