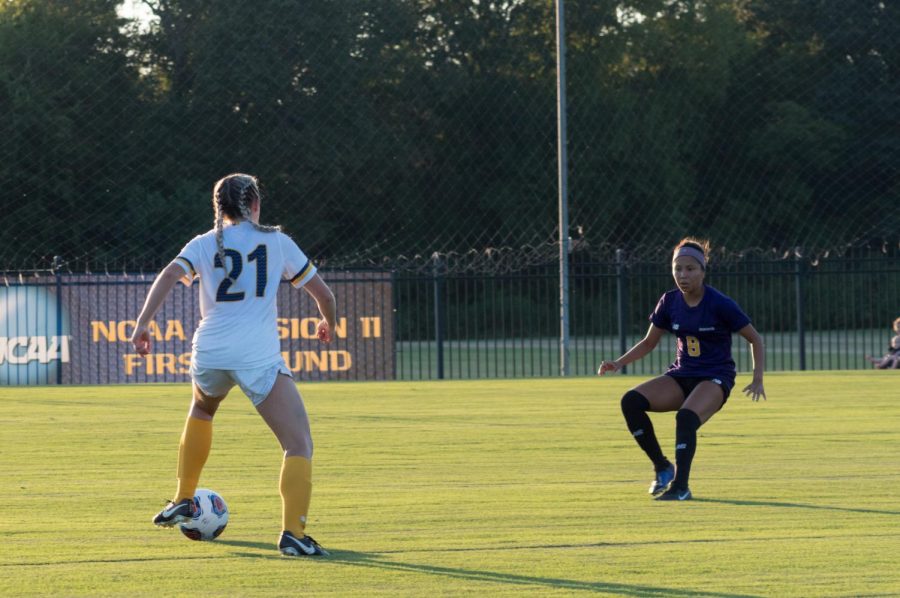 The Texas A&M University-Commerce soccer team had a 1-0 victory over Ouachita Baptist on Thursday, Sept. 12.

With some hope still left in the Tigers, they continued to fight and had a shot on goal that
was saved by goalkeeper Jen Peters in the 79th minute to seal the game. The Tigers tried to keep
pushing as the game was coming to an end, but the Lions defense was too much. Ouachita Baptist falls to 1-2 on the season. Beginning the match the Lions had a great start, they gained and held possession of the ball for the majority of the half. With the controlling start that they had, A&M-Commerce managed to get an early corner and miss three shots that they took at the goal. Even though the Lions were controlling the half they could not capitalize on the many
opportunities that they had. The Lions had a few corner opportunities and the shots that they
had taken were off-target.

“I thought from the get-go, we took control of the game,” Head Coach Neil Piper said on the team performance. “That is the first time this year that we have done that. It was definitely our best performance so far. Obviously being at home in front of our crowd helped a lot. The only downfall was we probably should have been up by two or three at half, but we kept them in it. But we had some good saves in the second half and kept them at bay.”

In the 30th minute, Skylar Sorrell had a shot on goal that was saved by the Tigers
goalkeeper. With the momentum that the Lions had you could tell that one of the shots were
bound to make it past the opposing goalkeeper. On the next Lion possession, Sorrell found Kara Blasingame coming up the left side of the field and helped position her in the box. Once in the box, Blasingame turned on the jets and dribbled past her defender taking a shot on goal with her right foot. The ball bent upwards, hitting the top right corner where the Tigers goalkeeper could not attempt to stop it. The Lions had a 1-0 lead and took it into the half.

“It’s really been a goal of mine to contribute more for the team,” Blasingame said after the game giving her thoughts on the goal. “I’ve been working a lot this summer on shooting and being able to be a bigger part of the team offensively. I’m happy that I could help my team out and we could get this win today.”

At the half the Lions had 10 corners and 13 total shots while Ouachita Baptist had five. The second half mirrored the first half as the Lions continued to have control over ball
possession and took many shots. In the 70th minute, a shot by Naomi Sink that would have put the game away, hit off the crossbar and the Lions found the rebound. The second shot attempt was high and missed the net.

The win improves A&M-Commerce’s record to 2-0-1 and 1-0 at home. A&M-Commerce will play at home and face off against Emporia State (1-1) on Sunday Sept. 15 at noon at the Lion Soccer Field.