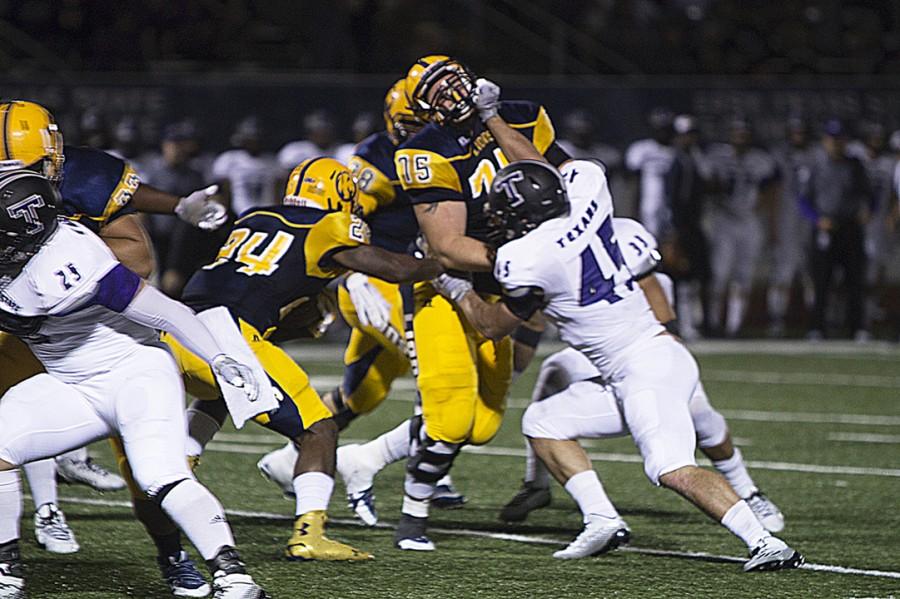 A high-powered offense and a hard-nosed defense game together in front of more than 6,000 fans to lead the Texas A&M University – Commerce Lions to a 53-25 win over the Tarleton State Texans Saturday at Memorial Stadium.

Quarterback Deric Davis stepped in for an injured Tyrik Rollison, and did not disappoint for the second week in a row, throwing for a career high 324 yards and tying his career high with two passing touchdowns. Senior wide receiver Ricky Collins also got into the passing statistical book with a 44-yard touchdown strike on a designed trick play.

The Lions defense did a solid job of containing the legs of Tarleton quarterback Collin Strahan, who came into the game with more than 200 yards rushing on the season, holding him to just 22 yards for the game. The defensive line showed their pass defending prowess again with an interception by Devar Brown, and special teams got into the action with a blocked punt being returned for a touchdown, marking the fifth blocked kick by the Lions in five games.

The Lions defense also improved on their nation-leading tackles for loss statistic, with eight tackles for a loss, including four sacks. With the win, the Lions defeated both of the 2013 Lone Star Conference Co-Champions in consecutive weeks, as well as brought home both the Chennault Cup and the President’s Trophy for the second consecutive season.

Davis was ecstatic about getting his first career start in a big game.

“It was awesome,” he said. “As a backup, you always have to be ready when your number is called, and I think I was well prepared.” Davis also said that he just “stuck with the game plan” and the results came his way.

Wide receiver Ricky Collins, who completed a 44-yard touchdown pass to Taylor Peasha, said it surprised him to hear the trick play called.

“I was so shocked,” Collins said. “But when I saw the ball come down and get caught for the score, it was an exciting moment for me.”
Head coach Colby Carthel was pleased with how his team performed under pressure.

“We came into the game pretty banged up,” Carthel said. “But our team rose to the challenge and really showed our depth.”

Carthel also praised the performance of quarterback Davis, stating, “Davis played excellent tonight, he managed the game well and made for a truly fun night.”

The Lions will look ahead to their next contest, which will see them head to San Angelo to face the Rams (3-1, 2-1) of Angelo State University.

The Rams have displayed a balanced offensive attack this season, averaging more than 200 yards per game in both the passing and rushing categories. The offense is led by junior quarterback Kyle Washington, who leads the team in both rushing and passing yards and currently has 12 touchdowns in just four games (three rushing, nine passing).

Defense for the Rams is stout as well, with six interceptions and 12 sacks as a team on the year, as well as holding opposing offenses to an average of 27.25 points per game. Angelo State stunned the Lions on homecoming weekend of last season with a late touchdown pass and 25-20 victory at Memorial Stadium.

The Rams will be coming into the game fresh from a 45-31 over No. 16 Midwestern State behind a career-high 250 yards rushing and three touchdown performance by Kyle Washington. The Rams finished the game with 531 yards total offense.

Offensively, the Rams will receive additional leadership from Ryan Byrd and Blake Smith on the ground and receivers Talon Smith and Chris Omigie.

Carthel, who attended Angelo State and was a four-year letter winner in football and track in field, played middle linebacker for the Rams from 1996-2000.

“This game will be the first Angelo State homecoming game that I’ve been to since I graduated,” he said. “Hopefully, we can go on in there and keep playing winning football against a tough team.”

The Lions will face the Rams at Legrand Stadium in San Angelo Oct. 11, at 7 p.m.