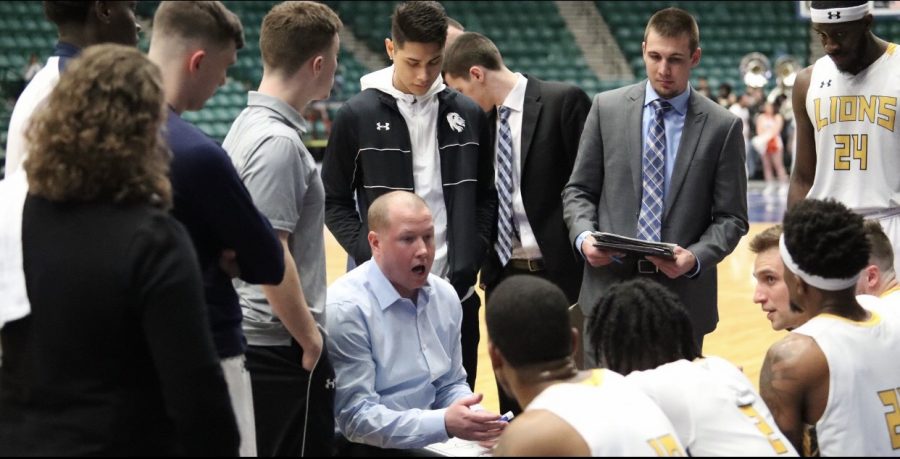 The Texas A&M University-Commerce men’s basketball team lost 55-57 in a thrilling Lone Star Conference Championship matchup against No. 4 West Texas A&M at the Comerica Center in Frisco on Sunday, March 10.

A&M-Commerce has been selected to represent the Lone Star Conference in the NCAA Division II Tournament as the fourth seed of the South Central region. They will face off against fifth-seed Dallas Baptist University in the regional quarterfinals.

The Lions entered the Lone Star Conference tournament as the second seed. On their way to the final round, they defeated seventh-seed UT-Permian Basin 90-80 in the quarterfinal and beat third-seed Angelo State 88-77 in the semifinal.

Against UT-Permian Basin, the Lions found themselves behind 0-11 but quickly responded as they took their first lead with 6:58 remaining in the first half. Both teams traded punches until they entered halftime dead-locked at 33 points each.

The back-and-forth battle continued in the second half as the game was tied eight times and the lead changed hands ten times. With a 69-67 lead and just five minutes to go, the Lions finished the game on a 17-5 run to advance to the semifinals.

The Lions were led by second-team all-Lone Star Conference forward Trey Conrod’s team highs in points (19) and assists (5). Second-team all-LSC guard Reggie Reid scored 16 points in just 21 minutes in his first game back since suffering an injury against A&M-Kingsville Jan. 31.

A&M-Commerce shot out to a 13-4 lead in the first five minutes, but the Rams fought back to take a one-point advantage with just under seven minutes to go in the half. Both teams traded baskets for the rest of the period until a late Angelo State free throw gave them the lead again as the Lions went into halftime down 37-38.

The Lions started the second half cold as Angelo State twice widened their lead to six points. A&M-Commerce caught fire midway through the half as they sank seven straight shots without a miss to seize a 55-50 lead.

The Lion defense stonewalled Angelo State in the latter part of the second half as they held the Rams to 8-21 shooting from the field. The Lions continued their hot streak to bury Angelo State and secure a trip to the Lone Star Conference Championship.

First-team all-LSC guard Willie Rooks earned a triple-double with 13 points, 10 assists, and 10 rebounds. His triple-double is the first in the Lone Star Conference tournament since it changed to neutral-site hosting in 2008.

Terrell led the Lions with 21 points on 66 percent shooting overall. The other Lions to score in double-digits were Grandstaff (17), Conrod (16), and Brown (11).

In the championship game, the Lions came out cold as West Texas A&M opened the game with 13 unanswered points and jumped out to a 17-point lead. Over the last 10 minutes of the half, A&M-Commerce came back with a vengeance as they held the Buffalos to just two points and scored 14 of their own to headed into the second half behind by only five points.

West Texas A&M began the second half with seven consecutive points as they once again extended their lead to double-digits. The Lions roared back and took their first lead of the game with a little over 11 minutes left.

The Buffalos regained the lead and twice pushed it to seven points before A&M-Commerce came back and took it back another time. There were four lead changes in the final two minutes of the game. Down two with time expiring, Rooks threw up a half court prayer as the buzzer sounded, but the shot was just off.

Rooks led the Lions in scoring with a 19-point, 10-rebound double-double. Conrod also earned a double-double as he scored 13 points, pulled down a game-high 11 rebounds, and tied with Terrell to lead the team with three assists.

A&M-Commerce looks ahead to the NCAA Division II Tournament opening round matchup against Dallas Baptist. The Lions are 16-8 all-time against the Patriots and have won the last two contests. Last time they played, the Lions lead from start to finish as they defeated Dallas Baptist 83-61 at home Dec. 6.

Against common opponents, the Lions are 5-1 and Dallas Baptist is 6-4. Statistically, the two teams are very close; A&M-Commerce averages 81.3 points a game and allows 73.8 compared to the Patriots’ 82.3 points scored and 75.5 points allowed per game. The Lions haul in just over four rebounds a game more than Dallas Baptist, and both squads average 15.9 assists per game.

Game time for the Lions’ regional quarterfinal match is set for 7:30 p.m. Friday, March 15 at First United Bank Center in Canyon, Texas. Fans looking to catch the game can get their tickets here or listen to the Lion Sports Network at KETR-FM 88.9 and KETR.org. More broadcast information will be made available as the tournament draws closer.