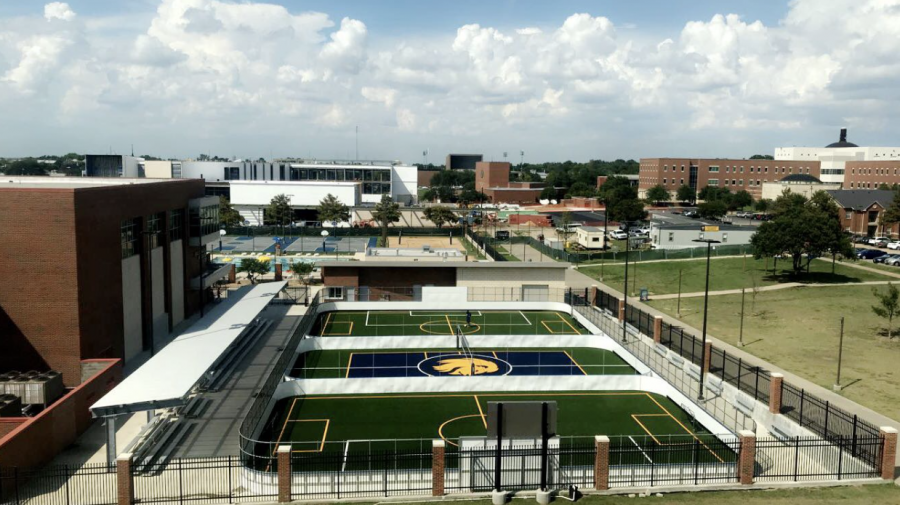 The Morris Recreation Center laid blue and gold turf on the MAC Courts in front of the building at the beginning of the fall semester due to student complaints about the original surface.

Laying out turf was something the staff had thought about in the past, but it was student complaints that brought the issue back to light. After talking to the Dean of Students, Thomas Newsom, the idea moved forward, according to Interim Director for Campus Recreation Justin Cato.

“Back at the beginning of the spring semester, we had students approach us about the old surface that was on there,” Cato said. “It was very hard and unforgiving, it would obviously get hot and if you fell on it, it would hurt. Also, when it would get damp outside, the surface would get very slick. So, honestly, anytime we would get condensation, we had to shut the whole thing down because it was unsafe to play on.”

Now that the new turf has been installed, the courts can be used for multiple sports, fitness classes and campus events.

“[Volleyball and soccer] are the main two things you can play out there, but what we’re about to do is have some of our yard intramural games, like corn-hole.” Cato said. “There’s quite a lot you can do out there. But that’s why we like having the dasher boards up because we can have three different things going on. Later this semester, we’re going to do a yoga class out there, and in November do a ‘Movies on the MAC.’ We’re just trying to find intentional ways to do programs out there.”

The turf is bringing new activities to the MAC courts besides various intramural games and programs. However, with more activities come new challenges, like balls flying out of the courts. That’s an issue the staff is working on.

“We’re getting a netting system to go above the chain-linked fence,” Cato said. “One of the problems we always have is that the balls go flying over and out. So we’re putting, it’s either eight or nine foot higher than the chain-linked fence, so that it helps with the balls that go flying out of the court area. We’re also, between the dasher boards that divide the court areas, are putting a net system up around those as well.”

Cato said that Campus Recreation is hoping to install the netting system in the next couple of weeks, but they are waiting on the manufacturing company to finish the system and deliver it to Commerce.

The court will also get new bleachers installed outside the court sometime during the school year, but there is no official date for that project yet.

“The bleachers that are out there as well, those are getting moved to the tennis complex in late October, and when that gets finished, then were going to put in a new bleacher system that sits higher so that people can actually come and see into [the courts],” Cato said.

Students like Jacob Galicia who go to the Morris Recreation Center often see the turf as an improvement.

“I do believe they are a good addition, it’s an improvement,” Galicia said. “The courts weren’t bad, it did work beforehand, but the turf allows for a different kind of play. I’ll definitely be using it a lot.”

For more information about the MAC Courts, or the Morris Recreation Center, go to pride.tamuc.edu/campusrec.