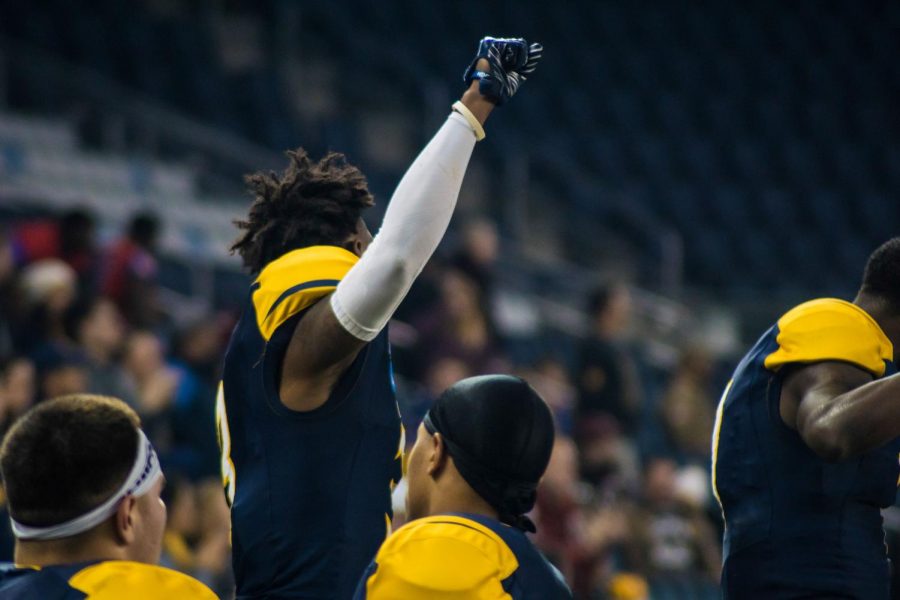 A Lions player holds his fist in the air to express his emotion during the tension-filled game.

After a long and anticipated eight months of offseason with no football, the defending Division II Football National Champions A&M-Commerce Lions are back in action Thursday night as they host conference rival Texas A&M University-Kingsville at Memorial Stadium at 7 pm.

A lot has changed since that magical postseason run by the Lions.

The Lions lost Harlon Hill Trophy Winner quarterback Luis Perez and All-American Left Tackle Jared Machorro to the NFL. Perez is currently fighting for a backup spot with the Los Angeles Rams, while Machorro signed as an undrafted free agent with the Indianapolis Colts. The Lions also lost a key part of their coaching staff as Defensive Coordinator Justin Deason is now at Incarnate Word in San Antonio.

With some old faces moving on from A&M-Commerce, there are plenty of new and returning faces to help fill those roles. Head Coach Colby Carthel will be entering his sixth season leading the Lions. He has taken the Lions to the postseason all five of his years, and has won three Lone Star Conference Championships in addition to last years National Championship. Carthel was named Coach of the Year by the Panhandle Sports Hall of Fame and the NFF Gridiron Club of Dallas Chapter following the National Championship.

In addition, the Lions still have one of the best defenses in the nation led by the man in the middle Brucks Saathoff and the likes of Dominique Ramsey and Alex Shillow in the Secondary. Scott Power will take over the reigns as Defensive Coordinator after leaving Central Washington University this past spring. Power will be taking over a defense that only gave up an average of 17 points per game.

“I am super excited to join the Lion Football family,” Power said. “I look forward to trying to add to the already strong foundation that’s been laid and hopefully continuing to win championships in the Lone Star Conference and contend at the national level.”

On the other side of the ball, Offensive Coordinators Matt Storm and Jared May will have their work cut out with the departure of Perez and Machorro, but like years past the Lions are expected to still be an offensive juggernaut. An offense that averaged 37 points per game last season will look to Senior Wide Receivers Marquis Wimberly and Vincent Hobbs to lead an offense that still has the quarterback position up for grabs.

The Lions and Javelinas will face off in the Division II showcase to kickoff the 2018 season. The game will be broadcasted on the Lion Sports Network and streaming live on ESPN3.