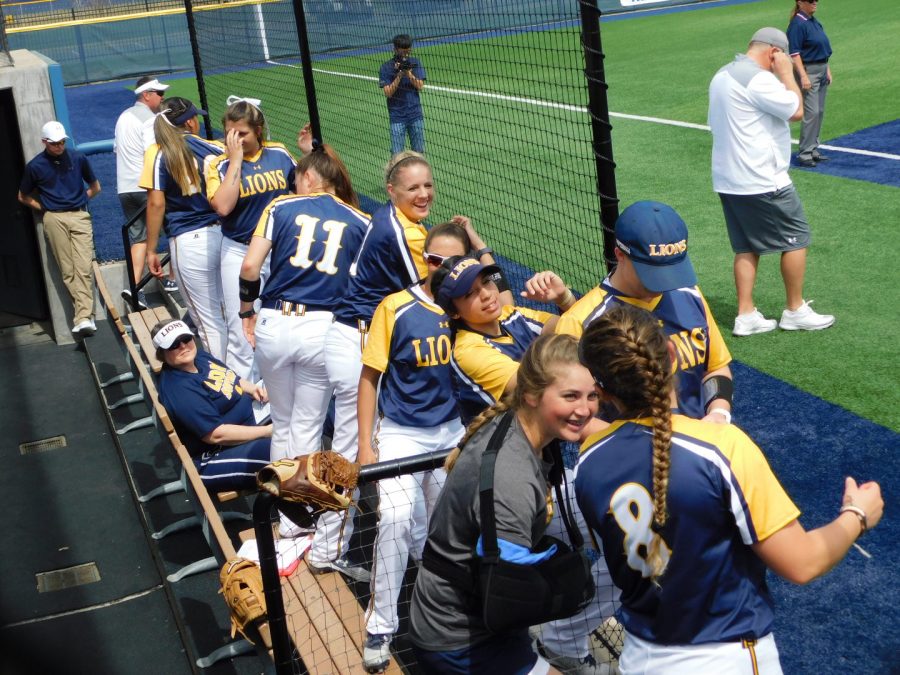 The No. 9 A&M- Commerce Lions softball team celebrated the program’s first ever top ten ranking with a dramatic sweep of Texas A&M-Kingsville, with each game going down to the wire.

In game one, the Lions led 5-2 headed to the top of the seventh inning. The Javelinas loaded the bases with nobody out, and had the go-ahead run at the plate. Selena Rima came in to pitch and got a double play for two outs and prevented any runs from scoring by getting a foul out to end the game. Mariah Jameyson led the Lions at the plate, she had three hits in three at-bats, including a double, a home run, two runs scored, and two runs batted in.

Then in the doubleheader the next day, the Lions used some late game heroics to finish off the sweep. In game two of the series, A&M-Commerce jumped out to a 3-0 lead in the bottom of the third thanks to home runs from Kinsie Hebler and Bri Sims. The Javelinas would respond by scoring six runs in the next two innings to take a 6-4 lead. Things would remain that way until the bottom of the seventh inning. After the Javelinas got the first two outs of the inning, the Lions would rally. Hebler worked a walk and with the Lions down to their final strike, Jameyson sent a pitch soaring over the right-center field wall to even the game at 6-6. Sims was next to bat, and after she worked the count full, she homered to nearly the same spot as Jameyson, giving the Lions the walk-off win 7-6.

The third and final game of the series was just as exciting, as the pitchers for both teams kept runs off the board throughout. The Lions got the game’s first run as Sims drove home Ciera Nunez in the bottom of the first inning, and the 1-0 lead held until the third inning. After A&M-Kingsville tied it up at 1-1, the game would remain that way until the bottom of the sixth inning. Monica Cherry led off the inning with a triple down the right field line, and was driven home on a two-run home run by Kayla Kilcrease, the Lions pulling ahead 3-1. In the top of the seventh, Katie Dean looked to finish off the Javelinas and earn the sweep by finishing off the complete game. She got the first two outs of the inning, but with a runner on, a game-tying homerun was hit by A&M-Kingsville, evening the game at 3-3. Emily Otto, the winner of game two, came in to try to keep the game tied, but with the go-ahead run at second base, a single to right field looked to give the Javelinas the lead, but a great throw from Vanessa Avina was in time and Jameyson tagged the runner out to keep the game tied. In the bottom of the seventh inning, after a strikeout to start the inning, the first pitch Jameyson saw was hit way out of the park to left-center field, the Lion with their second straight walk-off home run in a 4-3 win.

“I think we need to put a disclaimer in the stadium, kind of like Disney World, when you come in, if you have heart problems, this ride may not be for you,” head coach Richie Bruister said. “Obviously, the team was outstanding, great team effort, people step in and fill in, the team effort has just been awesome.”

A&M-Commerce has now won 12 games in a row, extending their record to 28-3 on the season. With the sweep, they improved their conference record to 13-2, moving into a tie for first place in conference with Angelo State. Jameyson’s performance earned her LSC Hitter of the Week honors again, her fourth award of the season, all coming in the last five weeks. Jameyson hit .875, with seven hits, three homeruns and five RBIs. Her on-base percentage was .909 and she slugged 2.125 in the A&M-Kingsville series. Jameyson leads all of Division II in slugging percentage, second in RBI, and in the top five in batting average, on-base percentage, hits, and homeruns.

The No. 9 Lions hit the road for a series with Eastern New Mexico (15-19, 8-10 LSC). The Lions play a doubleheader March 29 before concluding the series March 30, playing Thursday and Friday due to the Easter holiday. The next opportunity to see the top ten squad in action at home will be April 4 when a Heartland Conference squad comes to town in Rogers State (26-8). The Lions then face a huge rival at home in No. 15 West Texas A&M (26-5, 9-3 LSC) April 6 and 7.