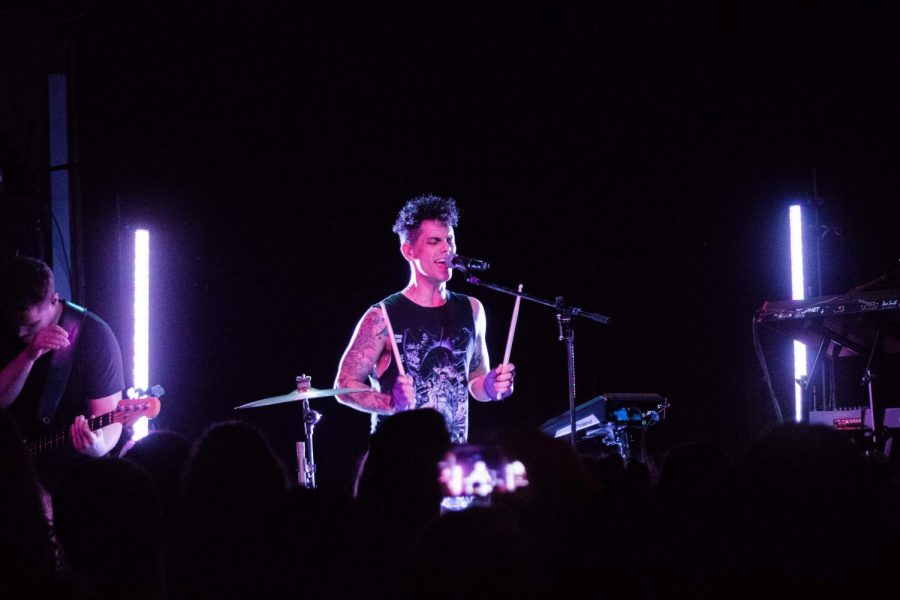 Vesperteen was unorthodox in everything they did. For example, frontman and founder Colin Rigsby was also the drummer. When he wasn’t holding down the rhythm, he was waltzing across the stage with a microphone in one hand and a drumstick in the other, flipping either of them periodically. He didn’t limit the wrath of his drum sticks to just the drum set either, he tapped them on the nearest objects at his disposal like the front of the house speakers.

Saying that Rigsby was theatrical in his movements would be an understatement. If you couldn’t hear what he was singing at the show, his facial expressions were able to communicate everything he was attempting to say.

The drum set was the key part of the entire performance, and it was set up front and center onstage. The set was made up of clear drum shells with LED lights that strobed and changed color to the music. There were no high hats on this kit either. Instead, electronic pads were set in place to simulate different sounds at the band’s discretion.

When Rigsby was playing the drums, he would often times only play with one drumstick. On the most intense parts, he would keep the microphone on its stand and drum with a second stick, but most of the show was spent demonstrating his miraculous gift of musical multitasking.

Nothing can be absolutely perfect, and he did a drop a drumstick on one or two occasions. However, that type of thing happens and didn’t inhibit the entertainment of the performance.

The entire show felt different, but in a good way. I spent most of the time watching with my mouth wide open in disbelief about how well everything worked together. Normally there is a running joke among bands that drummers shouldn’t be given microphones, but Vesperteen blows that out of the water. If this is a statement of how great drummers can perform, then all drummers should be given microphones.

In addition to the original music that was performed, the band also surprised the crowd with two incredible covers of “Sweet Child Of Mine” by Guns and Roses and “Crazy” by Gnarls Barkley.

Vesperteen is the type of band that you don’t necessarily need to do your homework on before seeing to have fun because you’ll feel right at home and enjoy yourself no matter how well you know the music. The combination of their catchy songs and a refreshingly new stage performance makes Vesperteen a pleasure to watch.