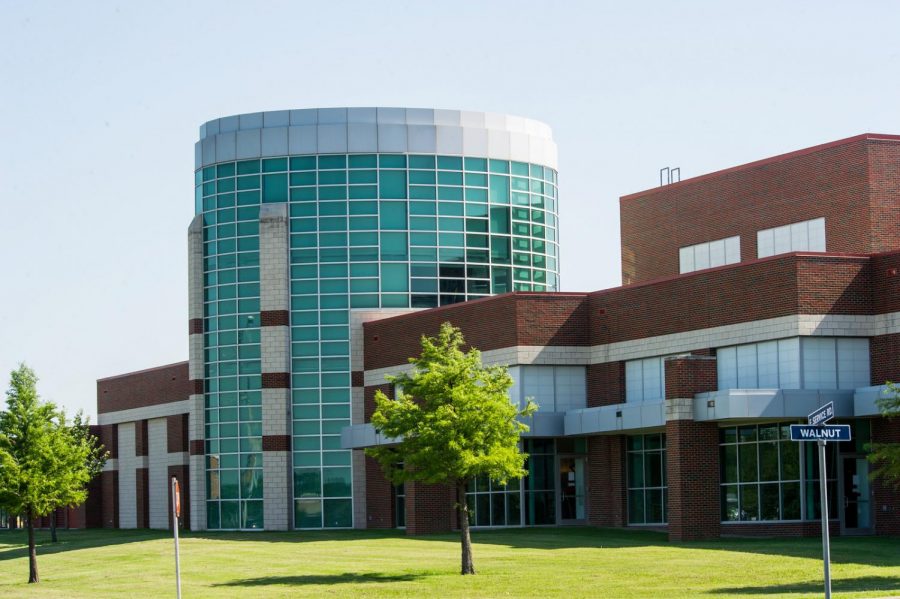 The Morris Recreation Center was completed in 2003 with a price tag of $12 million and is named after Jerry D. Morris, the ninth president of A&M-Commerce. Photo Courtesy | TAMUC

Three capital projects are on the agenda for the Morris Recreation Center (MRC) to either begin or finish construction by 2020.

The first project to break ground in the next few months will be the tennis courts which will be located at the Cain Sports Complex, replacing the baseball field. It will feature four courts and a building which will hold an office to keep the complex open longer.

Two courts short of being eligible for collegiate or UIL competition, the court will still have competition lighting and be able to be constructed upon later if interest in the sport grows.

“We don’t have an athletic tennis team,” Director of Campus Recreation Rick Rosenstengle said. “In speaking with our partners in the athletic department, that wasn’t a priority with them at this time, and so it’s probably a better use of resources to have those six when we have an athletic program.”

Rosentengle will start with a Purchase of Requirements (POR) during which he will hold a roundtable with students, staff, and other MRC users to hear their opinions on the courts. A POR will be held for every project before it begins construction.

“Within that POR process, you go out to different groups, and then you begin to look at your budget, what are your groups telling you, what are the needs, and put together a plan,” Rosenstengle said. “Then you go out and hire an architect to actually design it.”

The second project will be moving the sand volleyball courts to the Cain Sports Complex. The move will improve access as less staff will be needed to supervise use. It will also eliminate the problem created by sand blowing into the pool and its filtration system.

Construction on the sand volleyball courts will begin in the spring of 2019 after an architect is hired this fall. Rosenstengle is not worried that the location change will decrease use.

“We play intramurals out here, and it doesn’t seem to affect that traffic,” Rosenstengle said. “Like anything, I think it’s having where you go and knowing where they’re located and for our department to program activities out there.”

The third project will be a 10,000 to 12,000 square foot expansion to the north side of the MRC, in the direction of the new Nursing and Health Sciences Building, and it will house the cardio and weight equipment. The south area is currently used for cardio and weight equipment, and it will be repurposed as an activity room and body weight training.

The exact design of the expansion is unknown because neither an architect has been hired nor a POR held for patrons, but Rosenstengle and Senior Associate Director Justin Cato hope to see a mezzanine in the final design.

“Right now, it’s hard to really give you a definite answer on design and what it’s going to like,” Cato said. “That’s what the POR is for, to listen to the users to see what it is they need, and it’ll be up to us and the architects to figure out how to make it work.”

A basketball court will also have to been removed to allow for the expansion, and because this is a major construction project, construction will begin after the Nursing and Health Sciences Building is finished in December 2019 to avoid slowing traffic down.

The total cost for all three projects is calculated to be roughly $10.8 million, the expansion making up the bulk of the cost at $7.7 million. The MRC will use $2 million from a reserve account to go toward the tennis and sand volleyball courts and take out a loan on the expansion, leaving around $980,000 in the reserve account for facility upkeep and emergencies.

“That seems like a high number, but you almost have to have that number in reserve,” Rosenstengle said. “If we had to replace all of our basketball courts from scratch, it’d cost about $250,000. If the roof all of a sudden collapsed, it’d be a very large amount.”

These projects were made possible through the referendum passed in the spring of 2015 to increase the MRC semester fee to $150, and despite declining enrollment, projections were made at a 10,000-student enrollment, well below the current figure of roughly 12,000.