Lions break out the brooms for conference opener 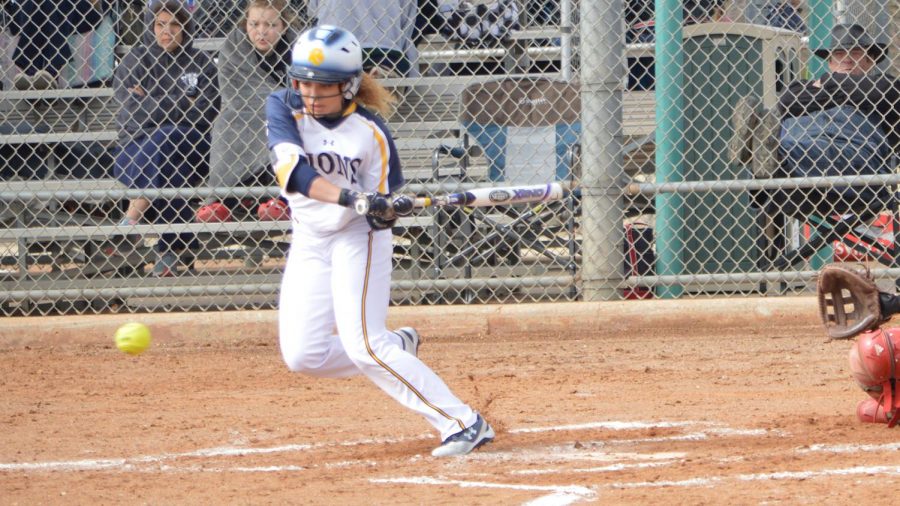 The Lions have won 10 of their first 11 games to start the season. East Texan Photo | BJ Laudermilk

The A&M-Commerce Lions softball team fought their way back in each game of their Lone Star Conference opening series, earning a sweep of the Tarleton State Texanns, and starting conference play at 3-0 for the first time in program history.

The Lions started the series with a 4-3 win. Emily Otto got the win, as she pitched the entire game, allowing three runs on seven hits and striking out three batters. The Lions trailed 2-1 going to the bottom of the fifth inning, but after a walk, the Lions went ahead on a two-run homerun by Vanessa Avina, her first of the season. In the sixth, two doubles in three batters time drove home the deciding run, as the Lions allowed a run in the seventh before getting a fly out to end the game.

In game two, the Lions offense was again held in check until the late innings. Tarleton State held a 1-0 lead until the fifth inning. The Lions loaded the bases with one out, and a walk by Chealsea Slider tied the game at one. The Lions would add on two more runs in the inning on a sacrifice fly and an error, pushing the lead to 3-1, before putting the game away in the sixth inning, getting two run-scoring singles and a bases-loaded walk to take a 6-1 win.

In the series finale, the Lions saw early struggles again. Tarleton got homeruns in the second and third innings to go ahead 2-0, and put runners at second and third with just one out when the game entered a rain delay. After a nearly five-hour delay, the game resumed and Tarleton hit another homerun, pushing their lead up to 5-0.

The Lions needed the delay to get their bats going. In the bottom of the fourth, they clawed back into the game with a two-run single, and added on two more in the fifth, with a homerun and another run scoring on a passed ball. In the sixth, the Lions finally pulled ahead, as Lone Star Conference Hitter of the Week Kinsie Hebler worked a walk to start the inning and Mariah Jameyson hit a go-ahead two-run homerun, pushing the game to 6-5 Lions. Hebler would earn the win in the circle, but she could not finish the game, as Tarleton loaded the bases with one out. Otto, who had started the game earlier that afternoon, came back in and got the final two outs, via a strikeout and flyout, to seal the win, and give the Lions the sweep.

The wins pushed A&M-Commerce to 10-1 on the season, with their conference record a perfect 3-0. With poor weather upcoming this week, the Lions road trip to Oklahoma and Missouri has been shifted. A doubleheader with Central Oklahoma scheduled for Feb. 22 has been postponed for the time being, while a road series this weekend with Missouri Southern State has been moved to Commerce and will be played Feb. 25 and 26. A doubleheader on the 25th will begin at 2 p.m., with a single game beginning at noon on the 26th. The Lions continue conference play in Lawton, Okla. against Cameron Mar. 2 and 3.