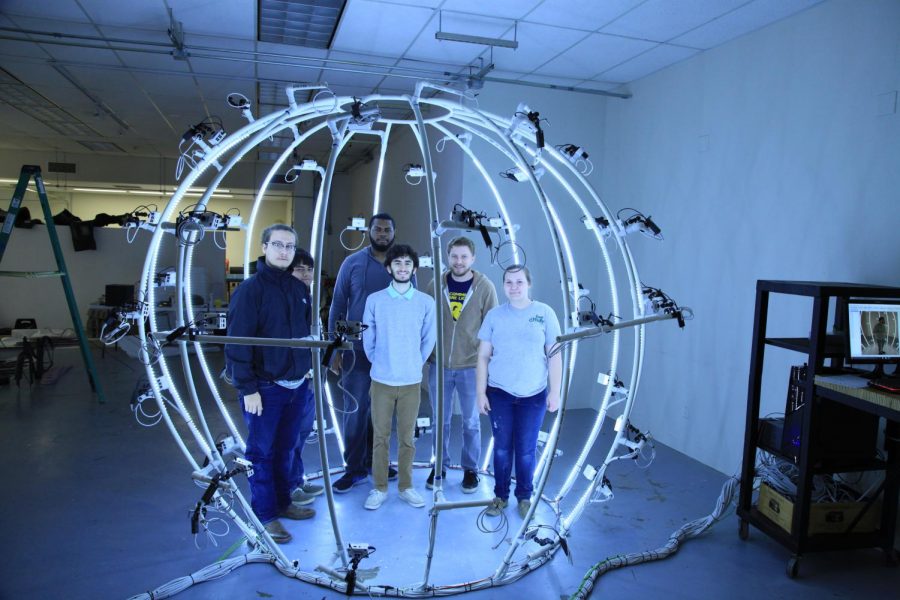 A&M-Commerce art students, along with Art Professor Joseph Daun, built a 3-D camera array during the fall semester, possibly the only one of its kind in the U.S.

“As far as I know, this is the only one,” Daun said. “To my knowledge, we’re the only ones that have a camera array with Raspberry Pis in the U.S. This is kind of a big deal.”

The array was constructed using 40 Raspberry Pis, small cameras that take high-resolution pictures, mounted on PVC pipe 360 degrees around the subject. These cameras take photos simultaneously on command from a central computer, and the design for this array is based off a European design.

“There was a manufacturing error [with a few of the cameras],” sophomore Michael Apodaca said. “It’s kind of a fluke on a few of them where the camera was aligned wrong. We had to kick the Pis sideways.”

The 2-D pictures are downloaded onto the central computer and are made into a 3-D model with a software called ReCap.

“It’s made precisely to make 3-D models from photographs,” Daun said. “You could do the same thing with your cellphone where you take photos all around the object.”

The students had practiced using ReCap by taking the 80 to 150 photos needed to construct a 3-D model with their phones, and they had 3-D printed a few of the models.

“This should be open to use by anyone as long they are able to understand the software,” sophomore Stephen Gonzales said. “But it’s definitely going to be primarily used by this class.”

The current version of the array is the third version that the students and the professor have created after experimenting with how to hang the cameras.

“We tried drilling holes in the pipes, but when we did that, they collapsed,” Daun said. “Then we tried the T’s with the pipe, and the pipes pulled out of the joints. Finally, I figured out we could use the slip T’s instead.”

Able to take pictures instantaneously for 3-D models, the array enables students to focus on editing the models before printing, speeding up the process.

The cost of the equipment and technology needed to make the scanner cost about $5,000 with at least $1,200 invested into the Raspberry Pis, which cost $30 each.

Daun is teaching a class during the spring semester called Photogrammetry (PHO 497 or ART 497) in which students will learn to use the array and ReCap.

“We’ll start by building models in the camera array, and I can actually demonstrate things,” Daun said. “What they’re going to learn is how to create 3-D models from photographs.”

Daun also noted the variety of models the students could scan and print using 3-D printers, and the editing software allows for more variation of a single subject.

“They’re going to learn how to edit those models,” Daun said. “So, in other words, if you wanted to make a bobble head out of the president and talked him into standing in the scanner, you could basically adapt his head to a bobble head body and print out a bobble head president.”

The class has relatively low material costs, and the students have no required textbook and only have to purchase the filament needed to print the 3-D models.