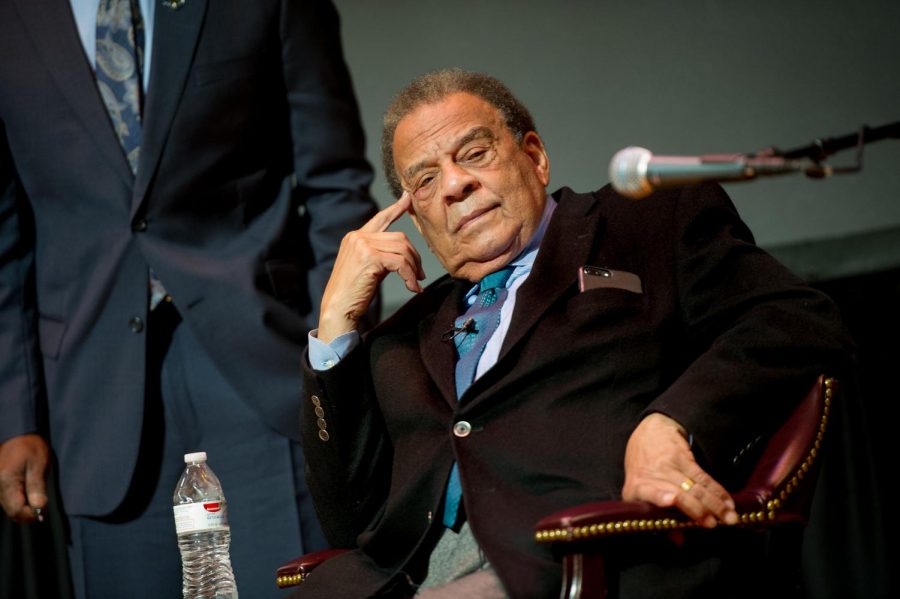 With courage and persistence, the world of the civil society can change the world of politics and adapt to the world technology, according to former UN ambassador Andrew Young.

Young returned to the university Nov. 27 after visiting in the spring to talk to students in “Think Globally, Act Locally” as a part of the Sam Rayburn Speaker Series.

“It takes a strong, moral—even religious—ideal to develop a majority that can change anything in a democracy,” Young said.

Young said that all people live in three worlds: politics, business and technology, and the civil society. These worlds are subject to change at different rates, but they all influence each other.

“In between the business and economic world and the political and democratic world, there’s another world,” Young said. “That’s where we are, civil society. It’s universal.”

He drew upon his experiences in the Civil Rights Movement where he stood along with the Rev. Martin Luther King Jr. and his congregation in their fight.

“It wasn’t a big church; in fact, it was a few crazy people from all the churches,” Young said. “In the ‘60s, the Civil Rights Movement generated enough interest and activity so that the political society had to respond.”

Young stressed that the current political world was divided with no clear majority, and the civil society needed become more active to spur the political world into action.

He also said that President Trump “is out of his element” of the business world and is struggling to adapt to the political and democratic arena.

“He really doesn’t know politics very well,” Young said. “He’s never run for anything. Even in his education, he was more interested in numbers than history.”

However, Young added that those that choose to become activists needed to “be cool” because it flies in the face of the anger and hatred that one could encounter.