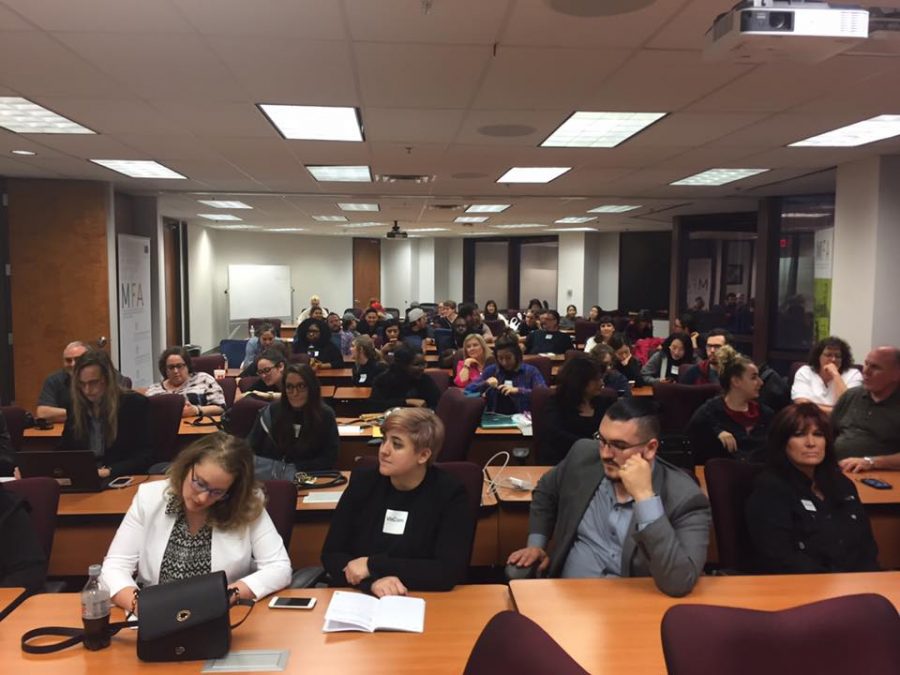 Students, parents, and alumni crowded into the third floor room in the early evening of Nov. 16 to voice their concerns at the forum. Photo Courtesy | Facebook

Universities Center at Dallas (UCD) will postpone its relocation to El Centro College until June 1 following an open forum between student, parents, and university officials Nov. 16.

“It [the postponement] was a direct result of it [the forum],” President Ray Keck said in an interview after the announcement. “I couldn’t say yes right away because I had to get on the phone with Dr. Joe May [Dallas County Community College District Chancellor] …and ask him if we could push the day of moving the classes to June 1.”

The concern was that students would not be able to satisfactorily finish out their education because of this move, and the postponement also allows students wishing to transfer before the move to do so. Discussion about the relocation began earlier this year, and the agreement to move UCD to El Centro College was signed Nov. 7 at a Dallas County Community College District board meeting.

The reasoning behind the relocation was the loss of money in the renting of the three-story space estimated at over $2 million since the university moved its program there two years ago. This extension will cost the university roughly $500,000.

The move was originally planned to take place during the winter to allow Spring 2018 classes to be held in El Centro.

213 students are enrolled for the Fall 2017 semester according to Berri O’Neal, Executive Director of Extended University. Keck said that 66 students would be affected.

“We committed when we came here to a program that was spectacular and in the perfect spot but to a cost that was absolutely unsustainable,” Keck said in his introductory remarks to the open forum. “Education is not a business. We don’t make money teaching students.”

The lease for the space has not been broken, and the A&M System will enter into negotiations with the landlord to alter the agreement.

“[This postponement] gives another six months that we can enter serious negotiations with the landlord to try to alter our arrangement,” Keck said.

Safety was brought up as a concern by students and parents, and according to Trulia.com, the area El Centro is located is marked as less safe with roughly 105 crimes occurring in a two-block radius this past year.

According to Lt. Jason Bone of A&M-Commerce UPD in his remarks at the forum, the El Centro College Police patrols a two-block radius around the campus, and it staffs 21 police officers, the same number as TAMUC’s police department.

A risk assessment of the new venue conducted by the A&M and Dallas County Community College District Systems will be presented Dec. 1 to assuage safety concerns.

Payment for the new space will be based on student enrollment in classes versus a fixed price for the space the university rents currently.

“If it’s a big class with students signing up, we pay them more,” Keck said. “If it’s a small class, we pay them less. For El Centro, it gives them access to this terrific program for their students.”