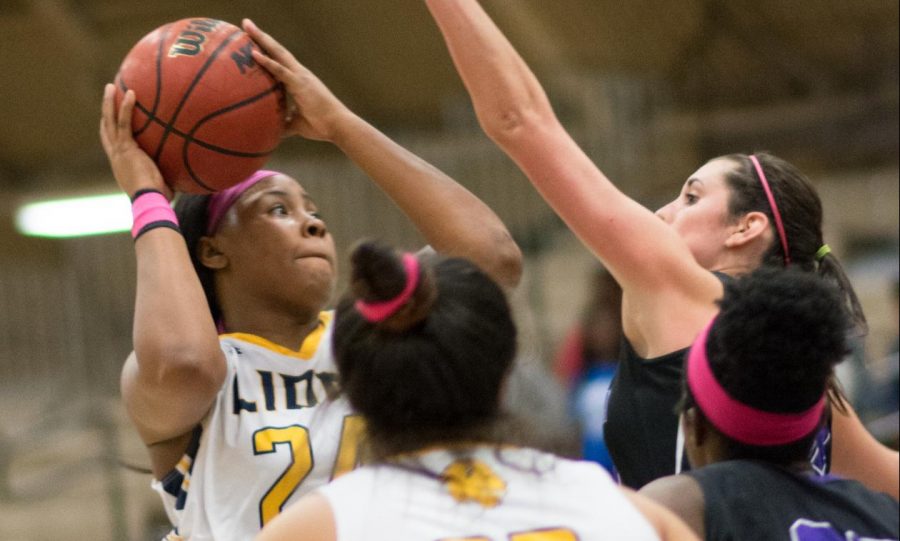 Lion forward Artaejah Gay, who will return this season, goes up for a shot.

The A&M Commerce women’s basketball team is coming off a successful season record of 20-9, the second most in program history, and a fourth-place finish in the Lone Star Conference at 14-6.

This season they hope to build off of last year in hopes of winning the conference championship, something that hasn’t been done since 2007. Artaejah Gay, who led the Lions in scoring with 14.1 points per game, is coming into her senior season to do just that.

“We want to build off of last year and of course get a Lone Star and a national championship,” Gay said. “It’s a lot of competition every year, and I know it’s not going to get any easier, so we have to focus. My job on this team is to continue to lead by example.”

Head coach Jason Burton is just the eighth coach in program history and already has the highest winning percentage in school history through his first three seasons.

“We’ve done better and have gotten better every year because we continue to bring in players that buy into the system,” Burton said. “We also have a lot of veterans on the team. When you have a team of five freshmen, these women know what to do and who to look up to.”

The Lions have added eight additions, five freshmen and three transfers, to the roster to help build on the success of last season. One of the standout additions is Melanie Ransom, a Graduate transfer student from Davidson University who will add to the veteran presence on the team.

“[Melanie] has a lot of college experience and brings a lot of size to the guard position for us,” Burton said. “She graduated from Davidson and chose us over some Division I programs because she wanted to go somewhere to win. She’s very invested.”

Also returning for their senior season is forward Brianna Wise who made the Lone Star Conference Defensive Team last season. Wise is coming off of a season where she averaged 10.3 points and 4.7 rebounds, and she is coming in with a “defense first” mindset to help the Lions.

“One of our biggest focus is defense,” Wise said. “I think we have a presence as far as length with our freshman and our returners. I think it will be a big thing for us in helping us win.”

Seven players in total are returning to the court including Jenna Price who was picked as the LSC Freshman of the Year last season.

The Lions will begin their season on Nov. 10 against Colorado State- Pueblo, the 5th best rank team in the country. The Lions will then play Metro State on Nov. 11, a team that won 18 games last season.

“We went out and got the toughest schedule we have had since I’ve been here,” Burton said. “This is a year we needed to go out and play some people and really put ourselves in position for postseason play, regardless of what happens in the Lone Star Conference.”