Keeping it weird at ACL Festival 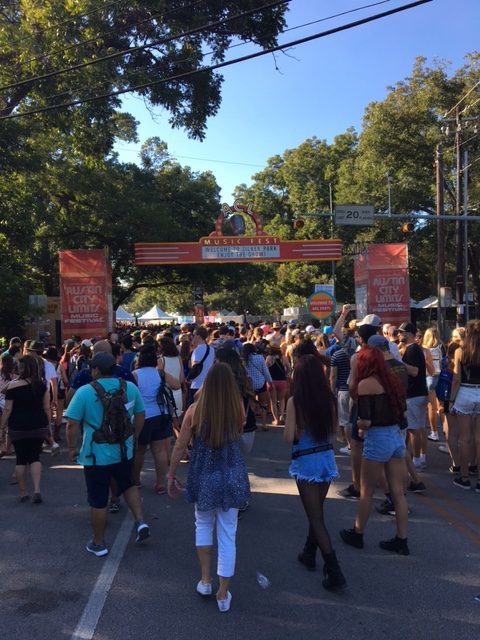 People walk into entrance of the Austin City Limits Festival.

Austin City Limits (ACL) Music Festival is a three-day event that happens twice a year in Zilker Park which is right outside downtown Austin, Texas. This year ACL was is Oct. 6-8 and 13-15 starting at 11 a.m. and ending at 10 p.m.

Friday, Oct. 6 the two main headliners for the day were The xx and Jay-Z and both started at 8:15.

I saw Jay-Z on the American Express stage, despite the schedule, at 8:23 but the wait was worth it. He started the concert with “Run This Town” and got the crowds singing along with him in no time.

I thought he started the concert off great and people really enjoyed themselves. At one moment during his concert he stopped the show to autograph a fan’s sign. Then told fans in the front to back up and make a circle and waited for a few seconds before starting to sing “Ni**as In Paris” while fans went crazy and started a mosh pit where Jay-Z told fans to “back up and make room”.

One if the craziest things Jay-Z had was this huge blow up animal balloon on his stage that was silver, almost as tall as the stage.

Jay-Z had a good performance and light show, but overall he sounded out of breath and seemed tired towards the end of the show however, he did come out for an encore show after he “finished” his show at 9:30.

Saturday Oct. 7 the two main headliners were Chance the Rapper and the Red Hot Chili Peppers.

I went and saw the Red Hot Chili Peppers because they are an older band and I do not know how much more they will be touring and Chance is younger so I would have more opportunities to see him later.

The Red Hot Chili Peppers did not disappoint and had the crowd going from the beginning until the end. They performed on the American Express Stage and started the concert with “Dani California”. The Red Hot Chili Peppers came on at 8:15 and “finished” their show at 9:30, before coming back out 5-10 minutes later to perform one last song to close out the night.

The light shows and picture effects they had while performing was amazing to witness in person. The main colors were on the darker side while also having a lot of red lights throughout the whole show.

Overall the show was one in a million and great, I cannot wait to go to another one. Their music speaks to different age groups and the crowd reflected that, but to see everyone come together and just enjoy listening to music together was wonderful to experience.

Sunday Oct. 8 the two main headliners were Gorillaz and The Killers at 8:15 p.m. I split up both concerts and only went to about 45 minutes of each. The Killers played at the American Express stage and the Gorillaz played at Honda. Which both stages are at two opposite ends of the park.

I think The Killers had the best light show of all performances throughout the whole weekend because they had bright green lights that came out to the audience and then up into the sky and you could see them the whole time.

Gorillaz just came out with a new album and played a lot of their new music… which is cool to hear for the first time, but I wish they could have played some of their old music so that the crowd would have been more into it.