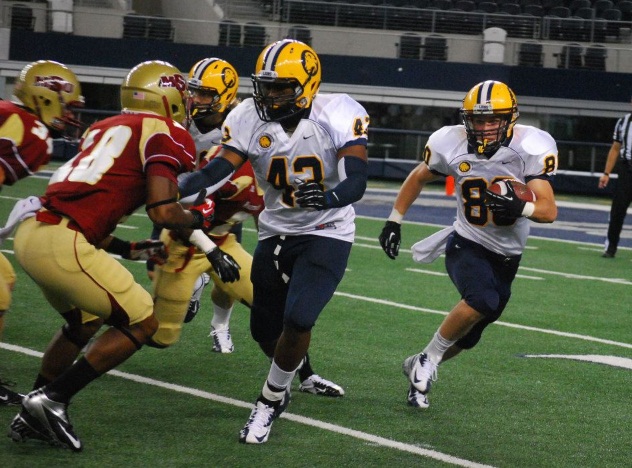 The No. 2 A&M-Commerce Lions football team looks to move to 5-0 tonight for the second straight season as they travel to face the No. 10 Midwestern State Mustangs in a top-10 showdown in Wichita Falls.

Both teams are undefeated on the season, and the Lions are 4-0 and 2-0 in Lone Star Conference games while the Mustangs are 3-0 on the season (2-0 LSC) after their week two matchup at West Florida was canceled due to Hurricane Irma.

These two rivals know each other well. They will be facing for the 23rd time overall with a slim margin between the two. A&M-Commerce leads 12-10 in terms of wins, but they have won only twice since 2001, and not in Wichita Falls since 1998.

The games between the Lions and Mustangs have come down to the wire in the Colby Carthel era. In 2013, Carthel’s first year, the Lions were underdogs at home against the No. 23 Mustangs and trailed by 17 points going into the fourth quarter, before putting together an impressive rally and falling just short by six points, 30-24.

In 2014, the last time A&M-Commerce played in Wichita Falls, the Lions were No. 22 and undefeated in conference play, and held a 17-point lead over Midwestern State with 12 minutes remaining in the game. The Mustangs came roaring back, outscoring the Lions 20-10 in the fourth quarter and forcing overtime. The Lions had to settle for a field goal on their drive in overtime, setting up a four-yard touchdown run for the Mustangs to seal the stunning upset 40-37.

2015 saw two Lion-Mustang matchups thanks to the now nonexistent Lone Star Conference Playoffs. The first game against Midwestern State that year was the Lions Homecoming game, and it saw the No. 11 Lions pick up their first win against Midwestern State since 2005. The Mustangs were No. 10 at the time and undefeated, but the 27-14 win sealed the second consecutive Lone Star Conference championship for the Lions, as they went 6-0 in conference play.

The rematch was played just three weeks later back in Commerce. The Lions were looking to win and seal their spot in the NCAA Playoffs, after just missing a spot the year before, while the Mustangs were looking for revenge. It was looking good for the Lions yet again. The game had been closer than the first matchup, but the Lions held a nine-point lead with nine minutes to go. A fumble by A&M-Commerce gave the Mustangs momentum, and they seized it, scoring 13 unanswered and stunning the Lions 37-33.

The most recent matchup between the two schools might have been one that hurt the most. The Lions were ranked No. 4 in the country, closing in on their highest ranking ever, while Midwestern State was No. 7 and both teams were still undefeated. It had been highly anticipated since the previous November, and was brought even more attention by the crew of ESPN 3 coming in to stream the game live. As per the typical Lion-Mustang matchup, it came down to the fourth quarter yet again.

The back-and-forth heavyweight tilt saw the Lions trailing by a point after three quarters and come back to seize a 12-point lead with five and a half minutes to go. The Mustangs would prove yet again that no lead was safe until the clock was at zero, shocking the Lions with a 13-point comeback, capped off by a go-ahead touchdown pass with under 30 seconds left. The heart-breaking 26-25 loss was the only one in the regular season for the Lions last year.

This year’s matchup has been discussed just as much as ever. With the Lions one step away from the top, they will look to corral the Mustangs in a tough environment. Midwestern State will also have heavy emotions after the tragic death of cornerback Robert Grays. Both teams have so much to play for, and this game will be a big step in determining whether the Lions can win their fourth straight conference championship.