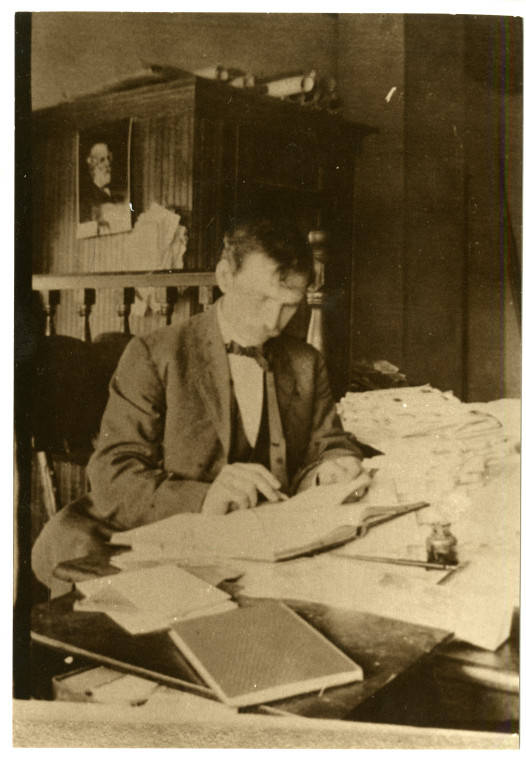 Professor Mayo at his desk, dated 1905

On Saturday, Oct. 14 there will be a ceremony to honor Mayo and the impact of his values to the college and its students.

The ceremony will begin at 10 a.m. with an opening invocation and include some brief speeches from the Student Government Association President, the Alumni President, and the President of the University.

This year, following recent tradition, there will be a memorial at Mayo’s grave site on Homecoming Weekend. A&M-Commerce is one of the few colleges in the nation that has its founder buried on campus.

After his death in 1917, Mayo was buried on campus at his request. Entombed is the more accurate term as Mayo’s casket was covered in cement at least two feet thick on all sides.

Mayo’s grave is located on the A&M Commerce campus west of the Henderson Building on Lee Street. The grave received an upgrade in appearance in 2016.

Mayo moved to Texas in 1889 from Kentucky, where he was born, to establish a school where everyone could have the opportunity for higher education.

Mayo founded the East Texas Normal College in Cooper, Texas on land he purchased himself. A fire destroyed the campus, and the university moved to the present location in Commerce, Texas.

Mayo pressed for the State of Texas to purchase the college to change it into a state teachers’ college. The Texas Legislature approved the purchase of the college on March 14, 1917, coincidentally the same day Mayo died.