Best and Worst Animated Films of 2016 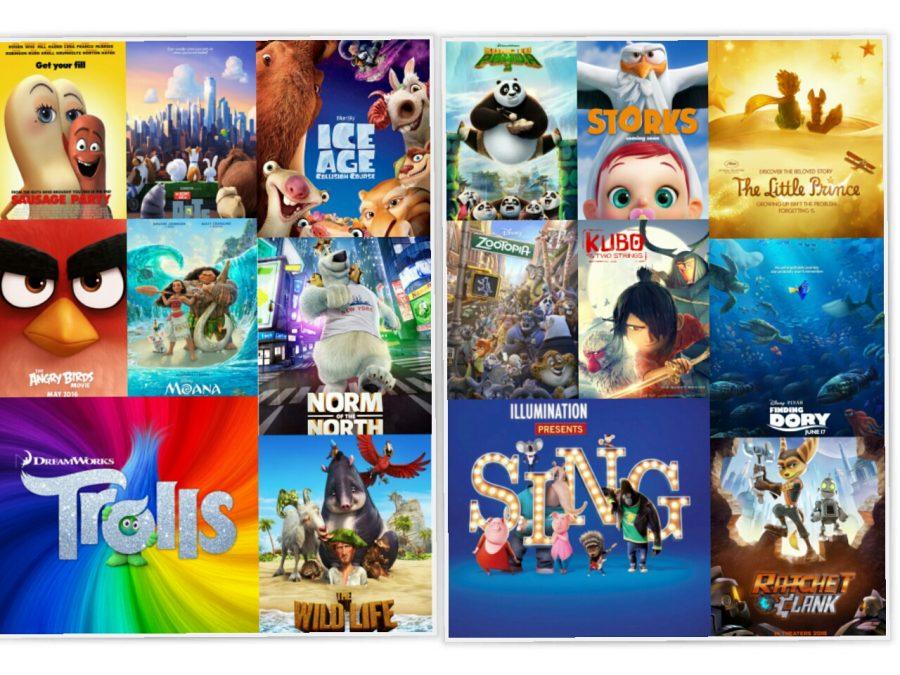 I’ve enjoyed the Kung Fu Panda films with Jack Black as the rolypoly warrior and got really excited for the third installment after Kung Fu Panda 2 ended on cliffhanger. I loved every minute of it. From Po’s humble origins being fully explored, the village of the Pandas, martial art fights, an intimidating villain voiced by J.K. Simmons (Whiplash, Spider-Man Trilogy), and seeing Po evolve from apprentice to master. Balancing comedy, action and drama Kung Fu Panda 3 is a satisfying conclusion (hopefully) to this action-packed trilogy, proving that DreamWorks can deliver good material.

Zootopia was quite the crowd pleaser that I didn’t expect a movie with anthropomorphic animals to have such heavy themes. A cute and sometimes dark movie that puts a lot of emphasis on its message that it leans to being a little preachy as well as a tedious third act, but makes up with its likable leads Judy Hopps (Once Upon a Time’s Ginnifer Goodwin) and Nick Wilde (Arrested Development’s Jason Bateman). Best thing of the movie: the DMV sloths, they are by far the funniest gag of the film that never gets old.

Storks was the biggest surprise for me coming from Nicholas Stoller director of Forgetting Sarah Marshall and Neighbors and screenwriter of the atrocious comedy Sex Tape. Playing on the children’s tale of storks delivering babies, an orphan named Tulip (Total Drama Island’s Katie Crown) and a stork named Junior (Brooklyn Nine-Nine’s Andy Samberg) go on a wild ride in delivery a baby while dodging countless of obstacles including a wolf pack voiced by comedy duo Key & Peele. While its comedy does descend into juvenile humor, it makes up for some surprising heartfelt moments where I was tearing up in the theater.

While Ratchet & Clank doesn’t break the video game movie curse I was looking forward to the voice work, and I must give the film credit for keeping the original voice actors of the main leads from the games. It’s nothing grand or special and I can admit it has its flaws but I still had a good time with it. Sing was another good time flick with its ensemble cast and karaoke jams; another film were I enjoyed the voice work and still remain surprised that they got Stewie Griffin himself, Seth MacFarlane (Ted and Family Guy) to be in a kids movie. Finding Dory was unnecessary but does a better job with handling supporting characters in a lead role than Cars 2 or The Penguins of Madagascar; loved Hank the octopus (Modern Family’s Ed O’Neill) but wasn’t pleased on the portrayal of Marlin and Nemo who were the heart and soul of the first movie. Kubo and the Two Strings is a sight to behold but was mixed on its ending and I couldn’t help but notice some striking similarities between Kubo and Harry Potter; both films have Raph Fiennes for crying out loud! Finally The Little Prince, I still don’t know what to make of it. Some scenes touched the heart while others left me perplexed and wanting more, give the film a watch and see what you make of it.—it’s available on Netflix.

I’ll give Sausage Party points on its creativity but its vulgar and crude humor was not my cup of tea and that’s coming from someone who enjoyed Deadpool. The Secret Life of Pets manages to be cute and that’s it. With the exception of a few side characters everyone ranges from generic to pointless and a slow plot that picks up in the middle only to succumb to a rushed ending. The one highlight Pets has is a scene where the dogs hallucinate in seeing singing and dancing sausages; having seen Sausage Party that same day it made it more hilarious. The Angry Birds Movie came closer than any video game adaption on trying to be good but its only saving grace is the main hero and villain. I must ask how did Sean Penn end up in this movie. His entire dialogue is nothing but grunts. Also, this film was aimed for kid’s right?

I really wanted to love Moana but its generic use of the Disney formula and its clichés made it such a lackluster with Maui being the only bright spot. Another letdown was DreamWorks’s Trolls that it’s over abundance of color and happiness would scare a My Little Pony character; as for its song covers Sing made better use of it. In what is the fifth installment, Ice Age: Collision Course serves as a reminder how great the first film is and how it got worse with every sequel made. Seriously, Blue Sky put this franchise on ice while you have the chance.

Anybody remember The Wild Life? Good, let’s keep it that way. A very loose adaptation of Robinson Crusoe that involves the most unbearable voice work I’ve ever heard. Rounding up the bottom of the barrel is Norm of the North a film that critics have labeled as the worst movie ever made and I wholeheartedly agree. This film has nothing appealing and is an insult to animated movies. What was originally a Direct-to-DVD movie, it’s confounding how this got a theatrical release from Lionsgate the same company whose previous animated film was the critically acclaimed Shaun the Sheep Movie. You would think Rob Schneider voicing the main lead would have provided a clue that this was a train wreck from the start.

What will 2017 have to offer? Will Cars 3 and Smurfs: The Lost Village succeed over their dismal predecessors? Will The Star follow in The Prince of Egypt’s footsteps? Are The Boss Baby and The Emoji Movie doomed from the start? Regardless, I’m looking forward to this new batch.