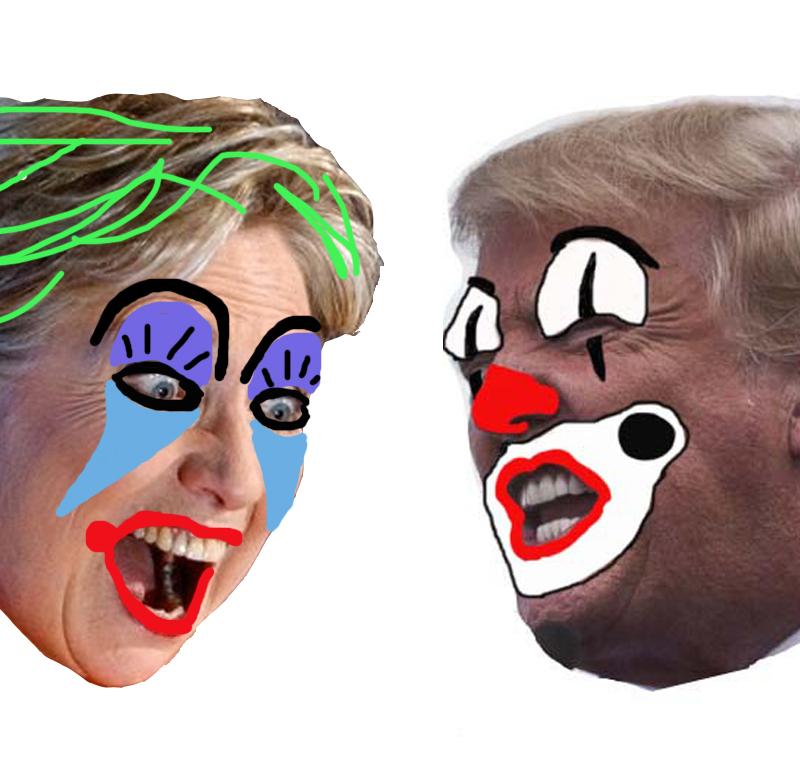 With clowns and campaign woes taking the lion’s share of the headlines these days, Christian Aleman decided to compile the neat, handy-dandy table below for each presidential clown’s-er, candidate’s stance on important positions.

He aims to be more selective on those coming to the US with a screening system, building a wall along the southern border funded by Mexico, and ending sanctuary cities.
She aims for reform that will make it faster to attain citizenship, focus on the detention and deportation of those immigrants who pose a threat, and create on Office of Immigrant Affairs.

He is against abortion except in cases of incest, rape, and the health of the mother.

She supports the idea and practice of abortion and use of contraceptives.

Allow gun owners to defend themselves and have a national right-to-carry in all 50 states. He plans to expand mental health programs in hopes of preventing mass murders. Also plans to fix the background check system instead of expanding it.
She plans to expand background checks and close gun show and internet loopholes. Support laws that stop domestic abusers from owning and buying guns. She is for the removal of military grade weapons from the streets.

Climate change is not occurring. [usnews.com, 10-11-16] He plans to tap into reserves of shale, oil, and natural gas reserves as well as coal reserves.
Climate change is real. She aims to implement pollution standards to clean air and invest in renewable energy that will decrease oil consumption.

He aims to ensure universities are making an effort to reduce the cost to attend and student debt incurred for federal tax breaks and money. He plans to ensure opportunity to accessible, cheaper, and easy to finish two and four year colleges.

He plans to expand the Navy, Army, Marine Corps, and Air Force. He also plans to expand cyber defense and offense and invest in a missile program to meet threats. Plans to pay by auditing the Pentagon and correcting problems within it.
She plans to use diplomacy to prevent Iran from attaining nuclear weapons and to build stronger ties with Cuba. She also aims to innovate capabilities to fight in a modern time and create a defense budget that uses money efficiently.