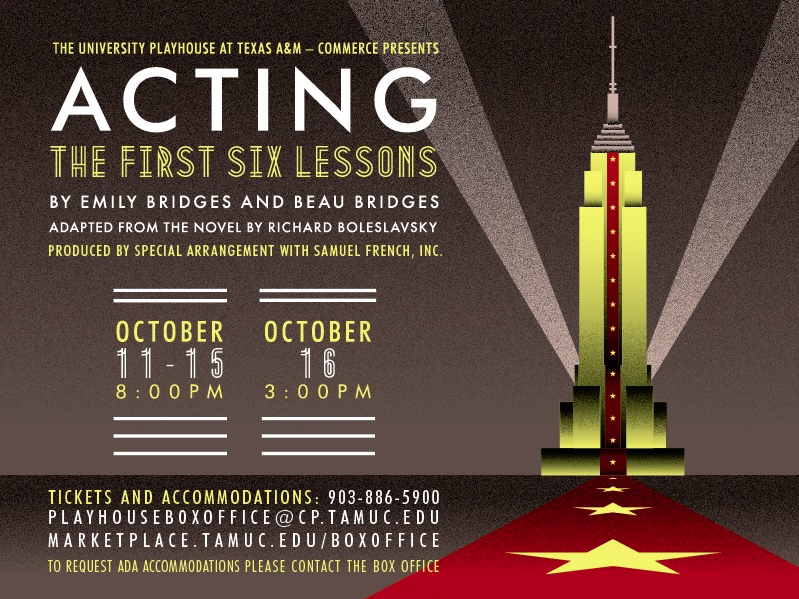 The Theatre Department performed “Acting: The First Six Lessons” by Emily Bridges and Beau Bridges and directed by Kelsey Cooper through the week of October 10. It was a charming production that showcased the department’s talent, but I felt it had a few shortcomings overall.

Held in the studio theater, dubbed the ‘black box’ because of its appearance, “Acting: The First Six Lessons” was adapted from Richard Boleslavksy’s book with the same name. The play centered on a young actress learning to perfect the art of acting with the guidance of a teacher. On entering the theater, ambient music reminiscent of the early 1900s aided the audience in guessing the play’s setting of 1930s New York, if they did not know already.

The venue itself offered some challenges to the director and actors because the audience viewed the play from four sides, but it was managed nicely with excellent blocking and actor awareness. Voices also echoed endlessly within the boxy theater especially during the more passionate lines, but these errors were out of the actors’ and director’s control.

The Teacher, played by Corbin Winston, was the wise man of the story who passed off his lessons, six of them in all, to Creature, played by Samantha Cox. In the midst of this heartwarming tale was a meta-play, play within a play, and the Stage Manager, Movie Director, and Understudy (played by Lacey O’Brien, K’Anthony Jones, and Zacherey Rodriguez respectively) staged and removed props as part of their roles. It was a bit confusing at times because whenever one of them would come onstage, I would never know if they had a speaking part. This confusion might have been a result of my bias toward traditional plays, however.

Samantha Cox as the Creature was definitely the best actor with Corbin Winston as the Teacher in a far second. The other parts had such little parts that they left no or insignificant impressions. Cox was strong and dominated the stage with her presence, and the audience straightened whenever she stepped into the lights. Cox, however, overshadowed her co-star Winston who most likely had the second highest number of lines. Be it his character or the acting, Winston’s part faded through the play from a strong presence in the beginning to an add-on at the end.

In all, the play did not have the audience riveted to their seats, but it did spark a few laughs here and there with Cox’s over-exaggeration or Winston’s careful quips. If you missed it, you missed nothing spectacular, but “Acting: The First Six Lessons” was another solid production by the Theatre Department, one of many.