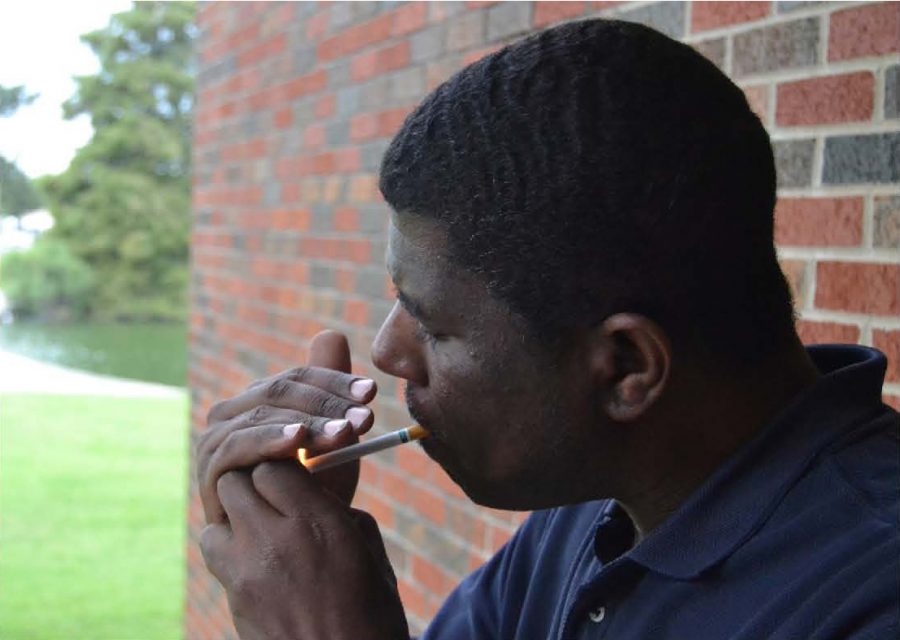 An approved campus-wide smoking policy is now in effect at Texas A&M University-Commerce.

The policy prohibits smoke, vapor and tobacco products in housing facilities, athletic facilities, eating areas, and A&M-Commerce-owned buildings and vehicles. The policy also states that the rule applies to “all indoor air space including foyers, entryways, classrooms, individual faculty and administrative offices, sidewalks and walkways, and attached parking structures immediately adjacent to all such buildings and structures.”

Derek Preas, director of Safety and Risk Management, said the enforcement of the policy clears the air of previous informal smoking policies around campus.

“The university for years has had an informal smoking policy in different places,” Preas said. “Has it ever been published or put out there? No, because nothing was ever official. We recently within the last year have approved the university smoking policy.”

The policy’s prohibition of smoking, vapor and tobacco use in, adjacent to, or around a building entrance or exit effects change in popular areas around campus. One of these areas includes the sidewalk between Education North and Gee Library. Preas said the prominence of that smoking area is the reason signs prohibiting smoking have been put there first.

“There in between Ed. North and the library, when you’re walking down that sidewalk, that’s your only means of entrance to and from those buildings, so smoking’s not prohibited there,” Preas said. “There’s been a large influx of people that have decided to smoke in that particular area, so that’s why we’re starting there putting our signs out.”

Preas mentioned the policy is not to ban smoking on campus but to designate areas for smoking.

One A&M-Commerce student, who wishes to remain anonymous, said the policy is not a big concern to him and could actually work out.

“If the entrance is big enough, then the people who smoke can smoke at some place far enough from the door,” the student said. “It could certainly be possible for it to work out, because there is a far enough path for a non-smoker to get in and a smoker to enter after them. I really don’t care about it. I can smoke in other places. It depends on the people who want to smoke near the door.”

However, the student added that while he does not smoke outside of the library that much, others do and might have a problem with it.

“If they make a smoke-free zone near the door, the other smokers might not be angry, but annoyed by it,” the student said. “We have to walk away from the building, and the smoke will come back. It takes a long time. If they have a class right after that in the same building, they probably don’t want to take a long time for it.”

The student added that he thinks it would be good for the school to provide smoking areas for students.

“I think it would be good to build some smoking areas,” the student said. “Not right next to the door, but as close as the policy will allow. It would be a better option.”

The student’s suggestion could be a reality in the future. Preas said the Department of Safety and Risk Management is trying to find smoking areas for students.

“What we’re trying to figure out right now is identify some areas and give those that want to use that area shelter, a trashcan,” Preas said. “We don’t want to send someone out to the back or around the corner and they’re just out there in the middle of nowhere. That’s not right either.”

Concerning the potential locations for smokers, Preas said there are many locations to consider. The Department of Safety and Risk Management is walking around on campus looking for areas to accommodate smokers. But, the needs of non-smokers must be fulfilled to identify the locations for smokers.

“The fact of the matter remains that it is healthier and safer to at least at first prevent those that are smoking or using tobacco or vapor around others, to get that environment away from those that do not want to be around that,” Preas said.

William Horton, president of the Student Government Association, views the situation from the side of smokers and non-smokers.

“The pros of enforcing the current procedure is you have many common areas that are now essentially smoke-free,” Horton said. “People generally have a better quality of life moving through common areas like the walkway between Ed. North and the library. The potential con you have is the regular smokers, either by habit or by cultural choice, end up having to go elsewhere. We don’t currently have set aside smoking areas that are sheltered from the elements, so in some ways we don’t do enough to provide for our smoking population.”