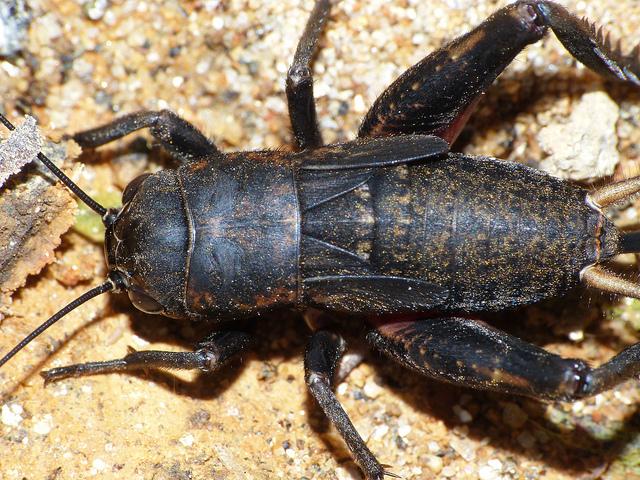 Photo by Hugo A. Quintero G. via Flickr Creative Commons

Most people who have been in Commerce for three or more years are well familiar with how severe cricket invasions can get in the early fall. The wall-covering blankets of chirping insects and the foul odor one notices before even setting eyes on the swarm is one of those things that A&M-Commerce students have come to expect (but dread).

The crickets seen (and smelled) around campus are black field crickets (Gryllus assimilis), and while the conditions that cause cricket outbreaks are not fully understood, they tend to happen when a summer drought is broken by rainfall (as was experienced three weeks ago).

“There’s not a ton of research on these types of crickets, so sometimes we don’t know how to explain why you’ll have influxes some years, and other years you won’t,” Erin Fortenberry, the manager of the university greenhouses and a lecturer for the horticulture program said. “Usually, when there’s a lot of rain in the spring, continuing throughout the summer, your cricket and grasshopper population will be lower, because of fungal diseases and other things that can attack them when they’re in their nymph stage, which is their baby stage.

We had a really wet spring, but then it got really super dry, crickets and grasshoppers kind of thrive in dry weather,” Fortenberry added. “Also, when we had that cool spell in August, when it was unseasonably cool for August…when it was nice outside instead of 105 degrees, they were probably doing better then, so a larger population lived. We will probably have a really large cricket population this fall.”

While weather conditions can create an environment in which more eggs and young crickets (nymphs) can survive, the universal drive to mate coupled with an insect’s characteristic attraction to light, account for why so many crickets often congregate on walls and sidewalks outside of public buildings.

“This time of year, the end of the summer and the beginning of the fall is their reproductive time,” Fortenberry said. “They’re all getting together for that reason. That’s why you see large quantities of them.

Of course, due to their odor and their ability to make public buildings unattractive in appearance, crickets are often a nuisance to humans.

“As far as cleaning them up, they can be nasty,” Fortenberry said. “When they defecate, it leaves stains…especially inside your house and on sidewalks, so it can definitely be an issue that needs to be addressed. They’ll eat anything, so there’s no telling what’s inside of them.

Also, they can actually, when they come inside your house or apartment, eat fabrics,” Fortenberry elaborated. “You’ll see that they’re really attracted to your clothes, like you’ll find them in your laundry basket or any pile of clothes…especially worn clothes. I don’t know if it’s the body sweat, but they’ll be attracted to it and eat on your clothes, then poop and pee on them, so they can actually do damage.”

Finally, lot of students and staff members may often catch a whiff of cricket even without seeing them, and this stems from them sometimes finding their way into tight spaces and being unable to find their way out.

“Sometimes, they get in spaces like the bottom of an elevator shaft,” Fortenberry said. “They’ll fall down in there where you can’t clean them out, so it stinks on campus sometimes because of that.”