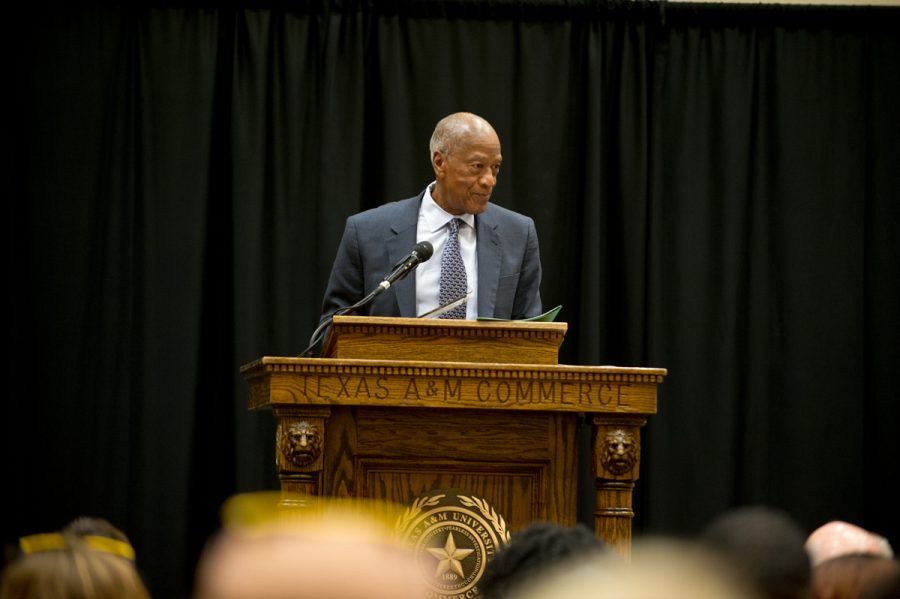 Robert L. Green speaks to the crowd in the Rayburn Student Center.

“Racism, both then and now, is illogical, insane and irrational, but we try to be like scholars and write about it in a rational, sane way…and it’s hard to write about insanity in a sane manner,” Dr. Robert L. Green, a colleague and personal friend of Dr. Martin Luther King Jr., said in a conference room packed with over 300 A&M-Commerce students, staff, faculty and Commerce residents Thursday, Sept. 8.

Pleased by the good turn out, the 82-year old Green shared stories from his lifetime of experiences battling ignorance and flawed, racist thinking, all of which are also related in his recently published memoires, At the Crossroads of Fear and Freedom.

Now, I’d learned in the South, how in those days, when you asked questions, you were always polite, you always said ‘sir,’ and you weren’t arrogant. You ‘took low,’” Green explained.

So, I went to one of the young assistant managers, and said, ‘Young man, I’m not from around here. Why is it that blacks and whites can’t take the same elevator up, but they can ride the same one down?,’” Green said. “He stopped and thought for a while and he said, ‘Well. I guess that’s just the way we do things around here.’ I thanked him, and started to walk away. Then he said, ‘Hey, come back here. I think I might know the answer.’ He said, ‘If a woman or man who’s white is about to get on the elevator to go upstairs to buy some goods, and they blacks getting on the elevator, they won’t get on it. Once they get up there, though, they gotta come down.’ I thought about that and how irrational discrimination is.”

Even though racial discrimination in the ‘60s is often associated with the South (and understandably so, especially as many in the A&M-Commerce community are aware of the fact that their institution was, at one time, one of the last remaining holdouts who stubbornly resisted federally-mandated school desegregation), Green made clear that bigotry often leered its head in northern states, too.

In 1962, upon completion of his PhD in Educational Psychology at Michigan State University, Green began his long fight for the right to own a home in the Big Ten college town of East Lansing, Mich.

“Realtors wouldn’t sell us a home in town, nor would they rent us a home,” Green said. “They told us directly, ‘We don’t sell to blacks, we don’t sell to Jews, and we don’t sell to Indians [Native Americans]’ They [the realtors] were direct. They would tell you directly to your face.

Of his time working with Dr. King, Green explained that one of the things the civil rights leader doesn’t get credit for, is encouraging the black community to “conquer the fear” instilled by generations of racially motivated violence.

“Martin Luther King Jr. used to preach about death a lot,” Green said grimly without a trace of his usual wit. “One of his favorite sayings was ‘Black people, you’re not going to be free as a people until you overcome your fear of death. You can’t be afraid to die. You have to be willing to give your life for freedom.’

My dad, though, was a fearful man,” Green said. “My dad would say, ‘Boys…you be careful, obey the police, don’t get in trouble, and do the right thing. My poor sisters weren’t even allowed leave the house.”

One day, several years later, I asked my dad to tell me something that he’d never told anybody else,” Green continued. “I told him it was for a history of the family I was writing, and I had to badger him.”

He finally broke down and told me, that when he was 14 years of age, his best friend was lynched…hung from a tree,” Green said to a silent room, packed with people transfixed on his every word. “I asked my dad why he was lynched, and my dad said he probably did nothing other than not being respectful enough to white men. Back then, white male lives mattered. Black lives didn’t.”

I asked all eight of my brothers and sisters if Dad had told them about the lynching, and he hadn’t told any of them,” Green explained. “He held that in all those years. The shame, humiliation…not being able to act out, and being fearful.”

Toward the end of his speech, Green drew parallels between the Civil Rights movement fought in Dr. King’s day the racial conflicts and arguments that persist even today.

“All lives matter, yes, but black lives matter, because I know the history of black people in this country,” Green said. “I’ve read it, I’ve studied it, I’ve lived it, and I’ve seen it.

Some people say the Black Lives Matter movement leads to violence, but when I was attempting to buy a home East Lansing, I was called a radical,” Green reminded those in attendance. “I was called a trouble maker. I had black and white students who’d march with me around city hall, and when some of them would threaten to burn city hall down, they said I was inciting violence. I wasn’t inciting violence. I was trying to buy a home. These young people that you see in the streets today, saying ‘black lives matter,’ they’re just trying to bring attention to people.”

Dr. Green’s presentation was the first in this year’s Sam Rayburn Speaker Series. The next one will take place on Wednesday, Sept. 22. and will feature Laura Jackson, survivor of numerous addictions, as well as sexual, physical and mental abuse.