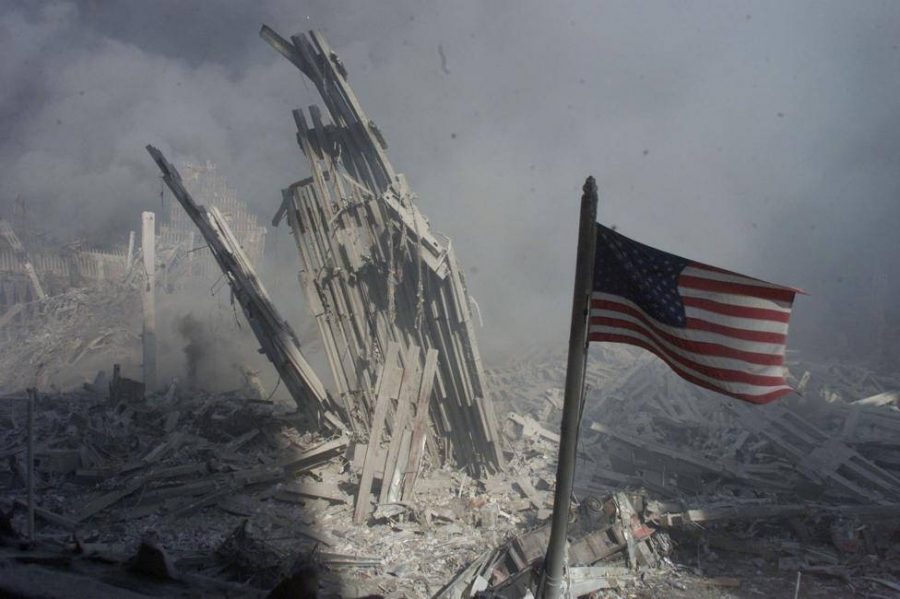 An American flag flies over the rubble of the Twin Towers.

“Never to be Forgotten”

15 years ago, on Sept. 11, 2001, the United States was jolted by attacks carried out by al-Qaeda at the World Trade Center, the Pentagon, and the field in Pennsylvania. Two students, a professor, a veteran, and a survivor shared their memories of the events of that day that marked history.

“A person hollered out that a plane had hit the building,” Carmen Muñoz, survivor of the attacks and author of Character of the Soul: An Eyewitness Account of 9/11 said. “I had been through the building maybe twenty minutes earlier.”

From the seventh floor of the ­­Federal Building on Broadway, Muñoz said she could see the North Tower on fire. It was from there that she witnessed the second plane strike the South Tower.

“I stood there frozen where I was standing for quite a while,” Muñoz said. “I couldn’t move.”

It wasn’t until a manager yelled at her that she grabbed her belongings and ran for safety, away from the chaos, according to Muñoz.

Meanwhile, other individuals managed to hear about the incident while driving, already after the attack occurred.

“As I got in my car, the radio was on and the radio announcer said that a plane had hit one of the World Trade Center towers,” Dr. Robert Rodríguez, Associate Professor of Political Science at Texas A&M University – Commerce, said. “By the time I actually arrived at the retreat location [a work trip], the announcer said ‘The World Trade Center has fallen. It is no more.’ It was completely unbelievable. In that moment, at that time, we didn’t fully realize the significance of what had just happened.”

Rodríguez, having been born in Brooklyn, New York but not living in New York at the time still felt a personal attachment to the tragedy.

“But for my family in particular it was quite impactful because, not a lot of people know this, but I was born in Brooklyn, New York and my family lived in New York for about ten years and my early childhood was there and so, of course, to see the emblematic buildings reduced to rubble was beyond shocking and extraordinarily sad,” he said.

Although fifteen years have passed since the attacks of September 11, 2001, Rodríguez shared some words he abides by in response to the occurrences.

“We have to continue on with our lives. We can’t let that incident, as horrific as it was, keep us or future generations, from living our lives, travelling and moving on. If we restrict ourselves out of fear, in a way, the terrorists have won,” said Rodríguez. “I absolutely refuse to let the terrorists win.”

Marine veteran and accounting major, Mike Ihrer, had just dropped his youngest son off at school and was on his way to work when he heard about the terrorist attack on the radio.

“We had this TV in the kids’ area at work, and I moved the TV to the register and we watched it all day long,” Ihrer said. “It was sad, it was really sad. You sit and you watch it and pray for the families. My heart went out to them.”

As a veteran, Ihrer said he “wanted to go over and take care of the people who did all of this” at the time of the attacks. “It’s something I’ll never forget.”

The younger population, although they were only kids at the time, were able to recall the events as they learned later or from memory of the day.

“I was homeschooled and it was pretty much because we were watching TV that we found out about it,” Jared Peckham, graduate student in agriculture, said. “I didn’t really hear about it for a day or two, but I can remember the footage of the man jumping out of the building.”

Yet, even as a child then, looking back, Peckham recalled the first responders’ actions as they rushed into the buildings even as they were still lit ablaze.

“The fact that the dust is still there and had firefighters running in to save lives; you can’t say anything about that.”

Sophomore biology major, Jobanet Flores, only four at the time of the events, recalled how she heard about the attacks.

“I heard about it in school in third or fourth grade,” Flores, said. “It took me a while to understand the whole thing. Knowing about the person, knowing they had a family, it’s easier to understand. It didn’t affect me personally, but yes, I felt bad.”

The fact that Flores was only four at the time has not changed how she understands the attacks from fifteen years ago.

“In society, it’s still something that hurts people,” Flores said. “It’s still a very relevant topic and people are still mourning to this day.”