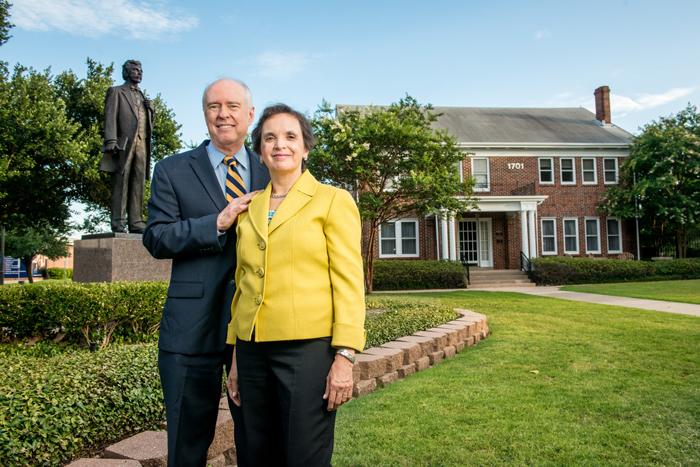 As students at Texas A&M University-Commerce get settled into their residence halls and apartments for another year’s worth of growing experiences, the interim president and CEO of the university, Dr. Ray M. Keck III, is also preparing to put himself in the middle of residential life by moving on campus, into the Heritage House – which served as the president’s residence from 1927-1968.

“I’m moving into it, my wife and I, and I’ll be using it as a mechanism for two things; to do what I can to strengthen and add to the sense of family, warmth and integration in residential life and to connect with alumni,” Keck said. “I want students in and out of that house every single day. If they knock in the middle of the night, I’ll get out of bed and open the door. My dogs will bark. I’ve got two cockers, so they’ll wake up too. But yes, I also think it’ll help me connect to alumni because it’s right next to that beautiful garden, the alumni center and Ferguson [social sciences building]…which is the oldest building on campus, so every single alum is gonna remember having had classes there.”

In the 1932 edition of The Locust (the university’s discontinued yearbook), students described the Heritage House (simply called the President’s House, then) thusly – “Its doors open to offer unselfish hospitality to all,” and “its cultured interior the scene of delightful gatherings.”

While Dr. Keck is certainly trying to rekindle some of that warmth, he is also looking into ways to encourage a culture of familial accessibility among other university faculty and staff members as well.

“One of the things that we’re looking at right now is reaching out to the private sector to explore the possibility of a public-private partnership to create a ‘university village,’ a housing opportunity for faculty and staff from the East Side of campus, drifting across Monroe St. and into Commerce,” Keck said. “I’m concerned that so many faculty don’t live in Commerce. Obviously, since I’m gonna move into the Heritage House, I think it’s important…so what can the university do to make it easier for people who wish to live here to do it?”

In addition to diving into the heart of the campus community, Dr. Keck is also leading the university through challenges that include working to find ways to add faculty in order to keep up with growth in student enrollment (despite Gov. Greg Abbott and Lt. Gov. Dan Patrick issuing a policy letter calling for state universities to reduce the amount of their budget requests by four percent compared to the previous year) and helping the university adapt to the reality of Campus Carry, which allows License to Carry (LTC) holders to legally carry concealed handguns on their person while on campus.

“If an event has a large number of underage children in it, there will be big signs [30.06 signs – pronounced ‘thirty ought six’] that will go out in front,” Keck said. “This would mean that if you’re approaching the event carrying a concealed handgun and you see that sign, you just walk back to your car and leave your gun in the trunk, because you can’t take it in. A good example would be the scrimmage we had with the football team. The police department put those signs out.”

Another Campus Carry-related issue that has had some faculty and staff members concerned and/or confused is how and when an office can be made a “gun-free zone.”

“If there’s a concrete reason why somebody feels in danger, like if someone came in and flashed a gun or threatened them,” Keck said. “It can’t be just because they don’t believe in it or their uncomfortable with it. It doesn’t matter. If they’re at least 21 years old and they have a license to carry, they might have a gun in a holster under their coat. However, you can’t prohibit that simply because you don’t like the idea.

Certainly, you’re entitled to protection if you have a credible threat to your safety,” Keck assured. “Take that to the police, and of coarse we’ll act. And, it could lead to that, in your office, guns are not allowed, but it has to be something more than just ‘I don’t like it.’”