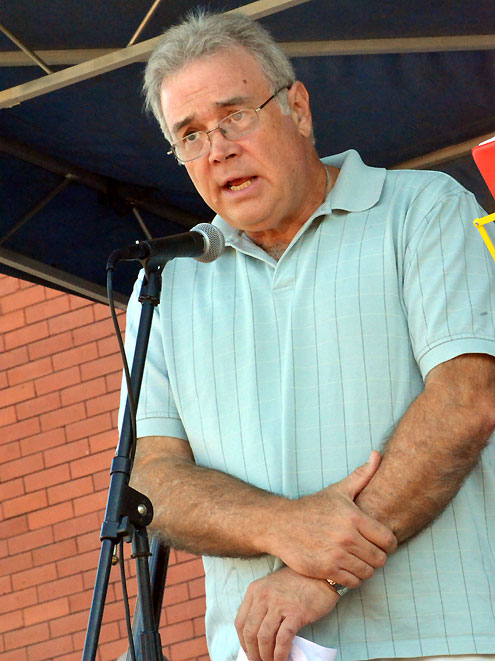 In his first sit-down interview since announcing his resignation at a City Council meeting on November 4, former Commerce mayor John Ballotti said that he had fulfilled his goals as mayor during his multi-term stint at the head of the city.

Seated behind the desk in his small, cluttered office in the Performing Arts Center on the Texas A&M University-Commerce campus (as the screams and loud conversations of theatre students echoed through the halls), Ballotti explained his reasoning behind his passing of the gavel to Pro-Tem mayor Richard Hill.

“What happened was a coincidence of timing,” Ballotti said when discussing the resignation of several key members of the Commerce city administration including City Manager Marc Clayton, and Finance Director Summer Spurlock within the span of a few months.

“As for me, I’m a term limits type of guy. Especially in small areas. I’m not a resident of Commerce. I’m an outsider. In the original campaign I campaigned on that because I’m not a retail person. My income comes from the university, so I can be more independent and you won’t be able to buy me off. Essentially, next month I was going to be a lame lame duck because I wasn’t going to fill out an application for a ballot spot.”

While the lame duck period for elected leaders is notoriously known for its inefficiency, it is rarely the type of thing that calls for a mid-term resignation. And for Ballotti, his impending job replacement was only a contributing factor to his decision to leave.

“The real issue for me is I got the feeling that I was losing the ability to lead,” Ballotti said. “And I’ve always felt from the time before I got into political communication that if you are in a political position in a leadership role and you can’t build a coalition to lead then you’d better get out. Let someone else do it.

“I think part of that, in my case, happened because I’m an outsider. Some people you make happy and then you do something and then some other people are happy but the group you first made happy is now against you. It’s difficult to reach that happy median.”

Another factor that Ballotti said ultimately helped lead to his decision to abandon his role as mayor is his ever-increasing workload as the head of the communications program at A&M-Commerce taking up more and more of his time.

“The Mayor of Commerce is a title,” Ballotti said. “You have a city manager. All the mayor does is cut the ribbons and open and close the meetings. There’s no power like there is in the big cities. It got to the point where there was nothing really on the horizon for me. It just seemed like time to go back to what brought me here in the first place.”

Ballotti’s final, big accomplishment as mayor was the restructuring and enforcement of several key requirements in the health and safety inspection code for residential areas in the city, which was the issue that got him interested in running for the position in the beginning. According to Ballotti, the house next to his own in Commerce was severely burned (though not totally destroyed) by a fire that was caused by faulty wiring that could’ve been caught if the city had been administering proper inspections at the time. When the house remained intact for an entire year, climaxing with a buyer actually attempting to renovate the charred remains of the house rather than tear it down and start over, Ballotti realized that something needed to be done and began his campaign. But, Ballotti says, even then, he knew that he only wanted to be a two-term official.

“It was something I was thinking about even when I ran,” Ballotti said. “I only wanted to do it for two terms. Commerce didn’t need me. I don’t feel bad. We were successful for three-and-a-half years and it’s getting down to the holiday season when I’d have to turn the gavel over to Pro-tem Hill. Well now he’s got it. I used General MacArthur’s farewell speech at the U.N. He said ‘Old soldiers don’t die off, they just fade away.’ In a couple of weeks, the fact that Ballotti was mayor won’t even be remembered.”

However, some would argue that Ballotti’s final moments as mayor were far from a fade. At the beginning of Wednesday’s meeting, Ballotti read a letter that was described as “scathing” by Pro Tem Hill in the article. In the letter, Ballotti described his frustrations with the city administration in some detail, though he refrained from mentioning anyone by name. Ballotti himself had yet to read the Herald Banner article that quoted Hill’s reaction at the time of this interview, but when asked about Hill’s description of the letter, Ballotti responded.