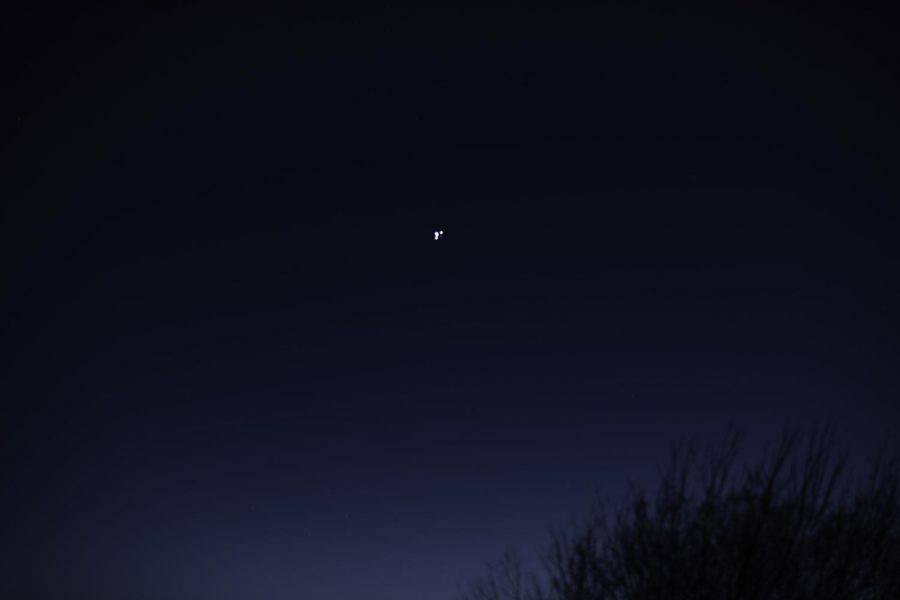 The ‘Great Conjunction’ of 2020 taken about 30 minutes after sunset as seen from the boat ramp of Cooper Lake State Park Doctors Creek Unit was a once-in-a-lifetime experience. This was the first time in 800 years for Jupiter, Saturn and Earth to align during the hours of darkness. The two gas giants came within 0.1º of each other. The next alignment will occur in about 20 years.

Jupiter and Saturn – the two biggest planets in our solar system – will appear within 0.1º of each other during the hours of darkness Dec. 21 for the first time since before dawn March 4, 1226.

The best way to view this celestial occurrence is by looking to the southwest low on the horizon 30-60 minutes after sunset.

Both planets should be visible to the naked eye for people with an unobstructed view of that portion of the sky. Saturn will be to the upper left and fainter than Jupiter which will pass its neighbor separated by hundreds of millions miles according to NASA.

The fact that this conjunction occurs on the winter solstice is coincidence. Jupiter will overtake Saturn on any day of the week approximately every 20 years.

“Conjunctions like this could happen on any day of the year, depending on where the planets are in their orbits,” said Henry Throop, astronomer in the Planetary Science Division at NASA Headquarters in Washington. “The date of the conjunction is determined by the positions of Jupiter, Saturn, and the Earth in their paths around the Sun, while the date of the solstice is determined by the tilt of Earth’s axis. The solstice is the longest night of the year, so this rare coincidence will give people a great chance to go outside and see the solar system,” according to NASA.

NASA gives the following advice to view the two planets together in the winter sky:

“Find a spot with an unobstructed view of the sky, such as a field or park. Jupiter and Saturn are bright, so they can be seen even from most cities.
An hour after sunset, look to the southwestern sky. Jupiter will look like a bright star and be easily visible. Saturn will be slightly fainter and will appear slightly above and to the left of Jupiter until December 21, when Jupiter will overtake it and they will reverse positions in the sky.
The planets can be seen with the unaided eye, but if you have binoculars or a small telescope, you may be able to see Jupiter’s four large moons orbiting the giant planet.”

NASA Science has published tips for photographing this occurrence of the great conjunction at https://solarsystem.nasa.gov/news/1615/how-to-photograph-the-conjunction-of-saturn-and-jupiter/.

“The 2020 ‘Great Conjunction’ of Saturn and Jupiter is the closest these planets will appear in the sky since 1623 – just after Galileo first observed them with his telescope. They are easy to see without special equipment, and can be photographed easily on DSLR cameras and many cell phone cameras,” according to NASA Science.

A wide angle lens will allow photographers to include a sense of place and size in the image while a telephoto lens or telescope will produce larger images of the phenomenon. A 200 mm lens will likely show the two planets as separate objects.

Use the lens’ widest aperture and focus on infinity.

People using a DSLR should study the “500 Rule” for astrophotography to reduce the chance of star trails.

“That’s where the ‘500 Rule’ comes into play. According to the rule, the longest shutter speed you can use before your photo gets blurry is equal to 500 divided by your lens’ focal length. If your focal length is 18mm, your maximum shutter speed is 27.8 seconds, (provided you’re using a full-frame camera),” according to Kristin Wong on lifehacker.

It is much better to round down to an even shutter speed rather than risk the chance of star trails by using a longer exposure. So, 25 seconds would be the appropriate shutter speed in Wong’s example.

People using a camera with a smaller sensor should use the lens’ 35 mm equivalency while performing the calculation.

Photographers with a high megapixel camera may need to use 400 to determine the longest acceptable shutter speed so 400/50=8 seconds.

A tripod is highly recommended to reduce camera shake. Divide one by the lens’ 35 mm equivalency (1/50=0.02 seconds) to determine the longest shutter speed that a handheld camera can expect to handle without noticeable camera shake.

Cameras that have either an internal or external intervalometer can be set to keep taking images without having to touch the camera between exposures.

A low ISO is preferred but a camera being handheld may need a higher ISO in order to shorten the shutter speed. Using a high ISO will produce visible digital noise so use the smallest ISO you can handhold.