The Testing Kitchen Hosts Second Event of the Fall Semester 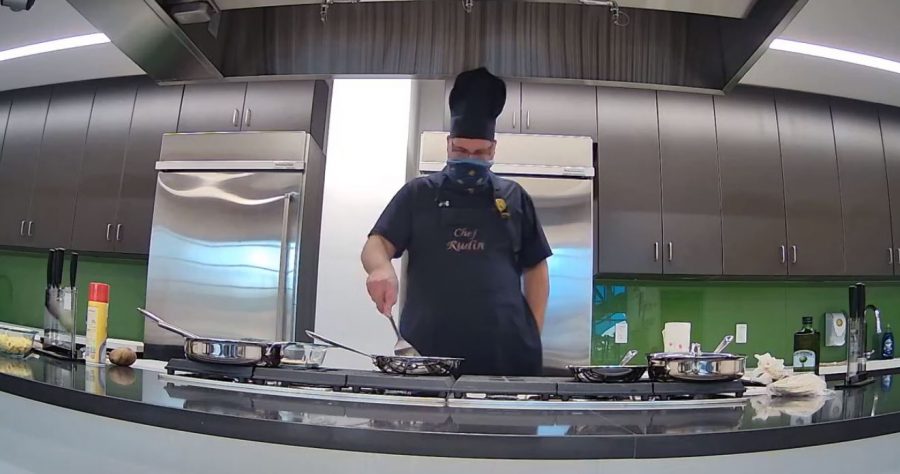 Dr. Rudin prepares to flip a flour tortilla in the kitchen.

In collaboration with the College of Innovation and Design, the Department of Health and Human Performance live streamed a Testing Kitchen virtual event for students, faculty and the general public.

Held on every third Tuesday of each month, this served to be the second event of the Fall semester.

With the ingredient list posted on the Texas A&M University-Commerce Department of Health and Human Performance Facebook page, viewers were able to follow along digitally as the Testing Kitchen made cooking demonstrations with as few ingredients as possible.

Hosted by Dr. Quynh Dang (Interim Director of First-Year Transforming Relationships & Academic Connections), she guided viewers in preparing breakfast tacos. However, she did not host alone.

The special sous chef of the night was revealed to be none other than Dr. Mark Rudin, university president. Dr. Quynh cooked with flour tortillas while Dr. Rudin, or Chef Rudin, cooked with corn tortillas.

There was flexibility in the ingredients, allowing viewers to add their own personal spin at home. The program’s purpose is aimed at college students who may not have a full kitchen to work with, but still want to prepare healthy meals on their own.

The word of the show was according to the alphabet and it being the second show of the semester, it landed on B. It also served as a preview for the theme of the next show; Bolognese, a slow-cooked meat sauce from Italy.

“Next month we will be doing lasagna in a crock pot!” Dr. Dang said.

For any questions on the Testing Kitchen, contact Dr. Quynh Dang at [email protected]